Bigg Boss 12 Day 8 Highlights: Urvashi Vani and Somi Khan brought the house down with their argument over the Made in India task that happened when actor Varun Dhawan entered the house. In tonight’s episode, the nominations happened and Bigg Boss punished the current captain-jodi of the house — Kriti Verma and Roshmi Banik for not following the house rules. Nominations created mayhem inside the house. The contestants who got nominated for elimination this week are Karanvir Bohra, Dipika Kakar, Roshmi-Kriti and Romil-Nirmal. Also Read - Bigg Boss 12 October 18 Written Updates: Shivashish And Deepak Fight For Captaincy, Housemates Reveal Their Sansani Secrets 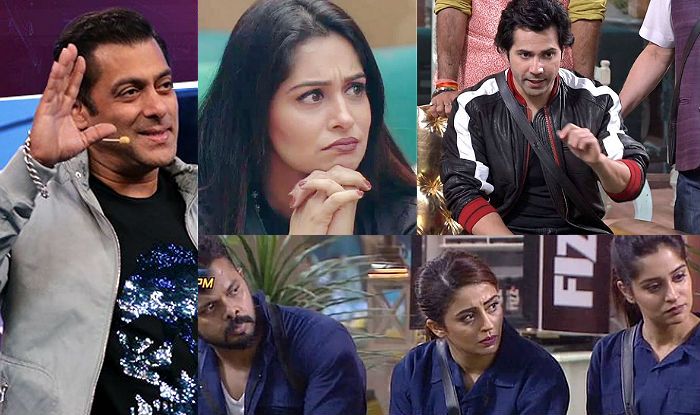 Salman Khan presented the second episode of Weekend Ka Vaar. Joining him was actor Varun Dhawan, who promoted his upcoming film, Sui Dhaaga: Made in India on the show. The actor first entered the house to interact with the contestants. He divided the contestants into two teams — blue and orange and asked them to perform ‘Made in India’ task. The orange team, lead by Somi Khan, won the task, that also resulted in a lot of showdown in the house later. Also Read - Bigg Boss 12 Day 11 September 27 Written Updates: Sreesanth Again Threatens to Leave The House, Vikas Gupta Shows Mirror to Contestants

When on stage, Varun challenged Salman to try his hands at embroidery. The host, to everyone’s surprise, killed it in the task and did a perfect embroidery. Salman also revealed that he learnt the tactics of stitching, knitting and embroidery from his mother, Salma Khan.