Bigg Boss 15: Aditya Narayan Reacts To Reports Of Participating In The Show, Here’s What He Has To Say

Indian Idol 12 host Aditya Narayan was rumoured to be participating in Salman Khan-hosted show Bigg Boss 15. Now, the singer has reacted to the reports on Instagram, and here is what he has to say! Read On.

Mumbai: Indian Idol 12 host Aditya Narayan was rumoured to be participating in Salman Khan-hosted show Bigg Boss 15. Now, the singer has reacted to the reports on Instagram and has denied the reports. In his one of the Instagram stories, he shared that he would be ‘happy to feature as guest’ or ‘host someday’. He wrote, “Contrary to speculation, I am not going to be a contestant on the upcoming season of #BigBoss or any season for that matter. Always happy to guest feature. Would even love to host it someday. But I have neither the time nor the inclination to participate. Best wishes to @colorstv @endemolshineind & the entire team for putting up a great show every year & I am sure this year will also be just as great (sic).”Also Read - Big Boss 16: Salman Khan Gets Irritated By Rumours That His Fee Touched Rs.1000 Crore। Watch Video 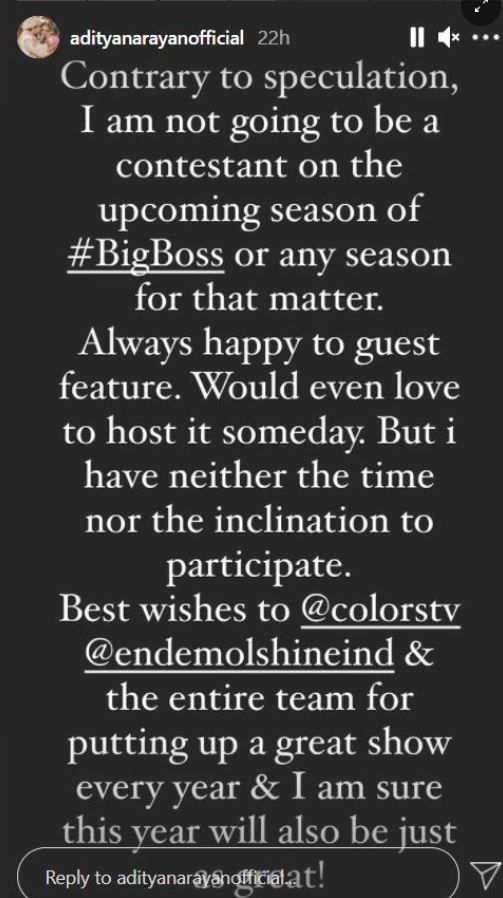 Aditya Narayan Reacts To Reports of Participating In Bigg Boss 15

Earlier, Aditya confessed in an interview with TOI that he wants to take break from the TV. He said, “will take a break from TV next year. I feel great about doing multiple things at a time, but it’s also exhausting. As grateful as I am to Indian television for being my cocoon through the past 15 years, it is time to move on to other things.” Also Read - Who is Abdu Rozik, Bigg Boss 16's Confirmed Contestant?

Meanwhile, Bigg Boss OTT hosted by Karan Johar is a digital version of the show for the six-week run on Voot. The show will premiere on August 8 and the show will seamlessly move into Colors with the launch of Bigg Boss season 15 with Salman Khan as the host. Bigg Boss 15 is expected to hit the TV screens on September 19. Also Read - Salman Khan Breaks Silence on Receiving Rs 1000 Crore Fees to Host Bigg Boss 16