Divya Agarwal emerged as the winner of Bigg Boss OTT but contestants who entered Bigg Boss 15 after the OTT season were Shamita Shetty, Nishant Bhatt and Pratik Sehajpal.

Mumbai: The upcoming Weekend Ka Vaar episode of Bigg Boss 15 will welcome OTT winner Divya Agarwal among other celebrities to support their favourite inmate. While Divya will be seen supporting Karan Kundrra, she will also question Shamita Shetty’s attitude in the house. “Agar inka yehi attitude rahega na, yeh agle chaar season aa jayengi na, jeet nahi payengi (If her attitude remains the same, she will not be able to win the show even if she comes for the next four seasons),” Divya can be seen telling Shamita in a recent promo.

Divya and Shamita’s fight has created a massive storm on social media. While some people took to Twitter appreciating Shamita’s ‘savage’ response, others mentioned that Divya isn’t ‘desperate’ to enter Bigg Boss.

#DivyaAgarwal never fails to show how pedestrian she is. No class only loudspeaker Shit . #ShamitaShetty proves what good upbringing looks like. #VarunSood kudos to you you live with this cringe human. Also @Divyakitweet please get a stylist you look horrendous. #BiggBoss15 https://t.co/2ImnszGS65

Meanwhile, Divya’s boyfriend also jumped in support of her. He took to Twitter and wrote, “To all the people who are calling @Divyakitweet faltu winner If BB OTT didn’t matter to you guys why did all of you strive so hard to make your person win? Nahi karte na. Itni fight kyu maari. Ye toh situation dekh ke flip ho rahe ho tum log.” 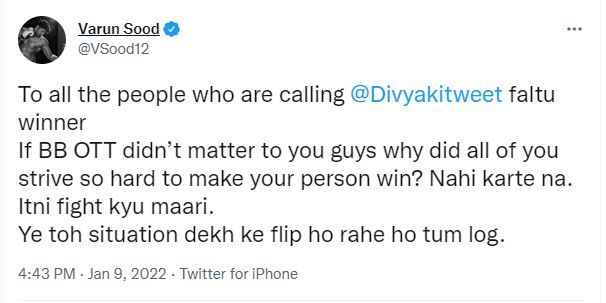 Follow this space for more updates related to Bigg Boss 15.