The Central Board of Secondary Education (CBSE) Class 12 results were announced on Monday. Actor Anushka Sen, best known for her role in TV show Jhansi Ki Rani, has scored 89.4% in CBSE class 12 board exams. She is happy with her result and this was the least she expected as she was shooting for her show all year round. Also Read - Rani Lakshmi Bai Jayanti: Twitterati Pays Tribute to Manikarnika Jhansi Ki Rani Who Rebelled Against Doctrine of Lapse

Speaking to India Forums, she expressed her excitement and said, “I am really happy with my scores, I have scored 89.4%, this was least expected to be honest because all year round I was shooting for my show Jhansi Ki Rani and had to travel for the shoots of my music videos and film as well. I would like to give the entire credit to my school, my teachers, and especially my principal ma’am who constantly motivated me to keep giving my best and work hard. I am so relieved now and really looking forward to pursuing my college.” Also Read - Rani Lakshmi Bai Birth Anniversary: TV Actresses Avika Gor, Kamya Punjabi And Others Pay Tribute to Jhansi Ki Rani

Also Read - TV actress Ulka Gupta reveals how she was rejected due to her dark skin colour!

Taking to Instagram, she also shared the good news with her fans and wrote, “Happy to inform you guys! I have scored 89.4% in my CBSE 12 board exam. (sic)” 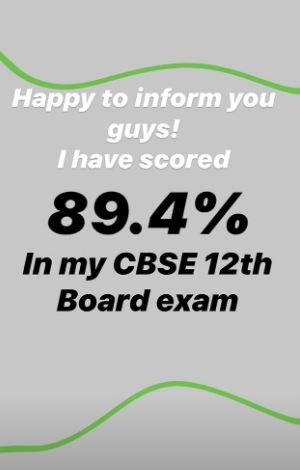 She is a commerce student and has featured in 14 commercials and have won many accolades for her role in Jhansi Ki Rani. Apart from this, she has also featured in Baalveer and few music videos.