KBC 12 October 19 Episode Highlights: This is The Question Swarupa Deshpande Could Not Tackle, Can You Answer It?

Tonight’s episode of KBC 12 begins with host Amitabh Bachchan welcoming the audience and rolls out the fastest finger first question. Subhash Bishnoi takes on the hot seat. He is one of the COVID-19 frontline warriors. During the lockdown, his main duty was to maintain the sanity of the Gajraula Railway Station and to look after the safety according to the norms given by the government. So as an Inspector in Railways, he was the one responsible to see that the situation is under control. During the lockdown, a lot of people started walking on the railway tracks as no transport was available.Also Read - Amitabh Bachchan Shuts Trolls With Savage Reply, Proves That He is the True Shahenshah

Here Are The Toughest Questions From Tonight’s Episode:

Q. Which of these pairs refers to the same day of the week the way Guruvaar and Brihaspativaar do? Also Read - Alia Bhatt's Selfie Game is on Point And Here is a Proof - See Jaw-Dropping Pics

Q. Which of these are used to make ‘aamchoor’ powder?

Q. In which of these sports can a team get ‘all-out’? 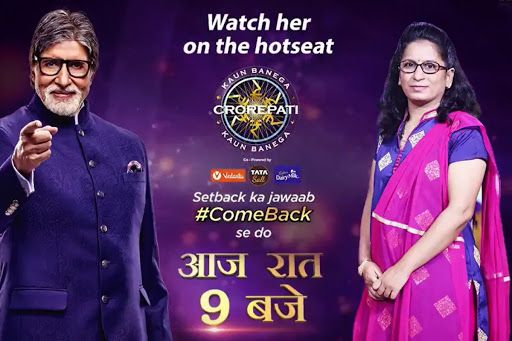 Q. Anarkali, Kafta, Angrakha are types of which clothing item?

Q. In the climax scene of the film ‘DDLJ’, Simran grabs Raj’s hand to board a moving what?

Q. Which of these mythological couples were married through a swayamvar ceremony?

Q. If you were eating a preparation in ‘tambda rassa’ or ‘pandhra rassa’, you are eating a dish that traditionally belongs to which of these regions?

Q. Which is the only Indian state where you would find this in its natural habitat?

Q. Who is the director of the film that featured this song?

Q. Who is the personality, seen during his days as a student leader?

Q. Which of these temples in south India is mainly dedicated to a form of Lord Vishnu?

Q. Which celebrity has daughters by the names of Renee and Alisah?

Q. Which of these rivers flows through three Asian countries namely China (Tibet), India and Pakistan?

Q. Which of these brands was launched by Karsanbhai Patel and named after his daughter?

Q. Which of these is a traditional game that is played over a pattern of rectangles outlined on the ground?

Q. While creating which of these on the internet do we get suggestions like, weak, average, strong?

Ankita becomes the roll-over contestant for the latest episode.