Netizen Accuses Sofia Hayat-Abhinav Shukla of Having ‘One Night Stand’, She Says ‘Didn’t Know Until I Googled Him’

Sofia Hayat has hit back at a troll who accused her of having a ‘one night stand’ with TV actor and Rubina Dilaik’s husband Abhinav Shukla. Tap To Read On.

Mumbai: Former Bigg Boss contestant Sofia Hayat has hit back at a troll who accused her of having a ‘one night stand’ with TV actor and Rubina Dilaik’s husband Abhinav Shukla. The social media user even warned them against a ‘legal action’. However, Sofia refuted the claim by the troll and said that she didn’t know Abhinav ‘until she Googled him’.Also Read - Shehnaaz Gill Writes Sidharth Shukla's Name First While Signing Autograph, SidNaaz Fans Get Emotional- Watch Video

Taking to Instagram, she shared a screenshot of the messages she received from the troll which read, “I know everything between you and ABHINAV Shukla… He also used you for the sexual purpose… I’m going to take legal action against u and ur one night stand wala partner ABHINAV SHUKLA…. I pray everyday you and your parents will die soon.” Also Read - After Salman Khan, Bigg Boss Fame Manu Punjabi Receives Sidhu Moosewala-Type Death Threat

Giving back to the troll, she replied by saying, “Someone sent me this message. It was my mistake. I don’t check my DMs usually. But she started off saying she desperately needed help. After a few minutes I realised she was a liar so I had blocked her. She made another account and sent this message! No one should ever be afraid of people like this. Trolls and bullies have an inner sadness that they inflict upon others.” Also Read - Jasmin Bhasin Finally Breaks Silence On Marriage Rumours With Aly Goni: 'No We Aren't Getting Married' 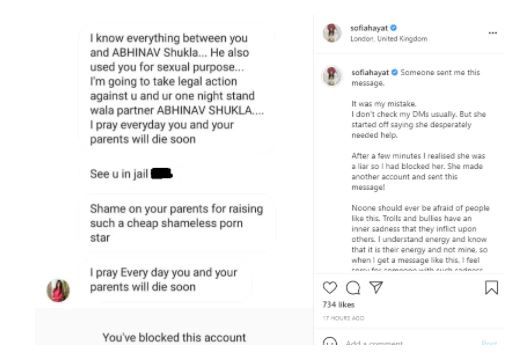 Sofia Hayat Gives Back To Troll

She further added, “I understand energy and know that it is their energy and not mine, so when I get a message like this, I feel sorry for someone with such sadness and hatred for themselves and can only hope they work on themselves to release this pain instead of hurting others. But then, I don’t get hurt, because I am not invested in this person. Bullies cannot hurt you when you know, their bullying is an inner reflection of their own state of mind. I send you love and blessings. May your heart and mind be clear. If not..I’m having a wonderful life and day 🙂 The next video explains my relationship with Abhinav Shukla. Namaste Shalom Salaam Satnam Mother Sofia Hayat.”

In a video, she further clarified the messages and accusations of having a ‘one night stand’ with Abhinav Shukla. She said, “My relationship with Abhinav Shukla.” In the video, she said, “I’m very shocked that someone can send me such messages. I’ve never met him, nor worked with him and we aren’t even friends but I have been accused…I’ve never even spoken to him. I didn’t know who Abhinav Shukla is until I googled him…Just to tell you that it’s not true.”

Sofia Hayat, who is known for her controversial acts, claims that she doesn’t know Abhinav Shukla, has supported Rakhi Sawant during the on-air run of Bigg Boss 14, which also indicates that she has watched the show and knows who Abhinav Shukla is. During the show, Sofia even slammed Abhinav and Rubina when the couple got worried about Rakhi’s unnecessary advances towards Abhinav.