It’s perhaps quite difficult to imagine what may irritate and irk a group of people on the internet in today’s day and age. Either they are jobless, too sensitive or find the urge to make a big deal out of almost anything, which is why people easily get trolled these days. And unfortunately, it’s the celebrities who take the beating most of the times, whether it’s with respect to their clothes, body size, random tweets, opinions or posts. Also Read - Dadasaheb Phalke Awards: Sushant Singh Rajput Honoured With Critic's Best Actor For His Contribution To Hindi Cinema

Well, the recent celebrity to fall prey to “trolling”, albeit not for the first time, is Twinkle Khanna. This time she got trolled for announcing the auction of the same naval costume that her husband, Akshay Kumar wore in the 2016 film Rustom in which he played the role of a naval officer named Rustom Pavri. The actor earned several accolades from all corners for his role. However, what many may not know about it is that the actor received severe backlash for the costume’s “inaccuracy.” Back in the day, the “uniform” received criticism by a person on Twitter, who said, “Bollywood can never get the uniform right. The horrid #Rustom (set in ’59) is no exception.” Also Read - Police Deployed Outside Amitabh Bachchan's House After Congress Leader's 'Black Flag' Call

Perhaps that’s why when Twinkle announced the auction of the naval suit today, it created quite a ruckus on Instagram. Akshay was the the first one to talk about it on Twitter. He posted, “Hi all I’m thrilled to announce that you can bid to win the actual naval officer uniform I wore in Rustom! Auction’s proceeds will support the cause of animal rescue and welfare. Place your bid at http://www.SaltScout.com,&#8221; he tweeted.” Also Read - Akshay Kumar's 'Toilet: Ek Prem Katha' Gave Confidence For Bhor: Kamakhya Narayan Singh

Hi all 🙋🏻‍♂️ I’m thrilled to announce that you can bid to win the actual naval officer uniform I wore in Rustom! Auction’s proceeds will support the cause of animal rescue and welfare. Place your bid at https://t.co/6Qr0LRnTFm! pic.twitter.com/FF23tlogs1

Khanna took to Instagram to share the same message and picture on her official Instagram handle. And within no time, she was heavily trolled by multiple users on the photo-sharing platform. “Using all the goodwill I have left to raise money for a good cause 🙂 Do bid folks! And thank you @karanjohar @hrithikroshan @sonamkapoor and of course @akshaykumar for giving all this fab stuff to @saltscout toward the Janice Smith trust for animal welfare!” she wrote. The auction reportedly has garnered a Rs 5 crore bid already. However, some users on Instagram didn’t take it quite well. Most of the people who saw it felt the auction was an insult to the Indian armed forces and naval officers who are at such a high post. Many felt that their designated uniforms should be won by merit and not by bidding. Check out some of the harsh comments below : 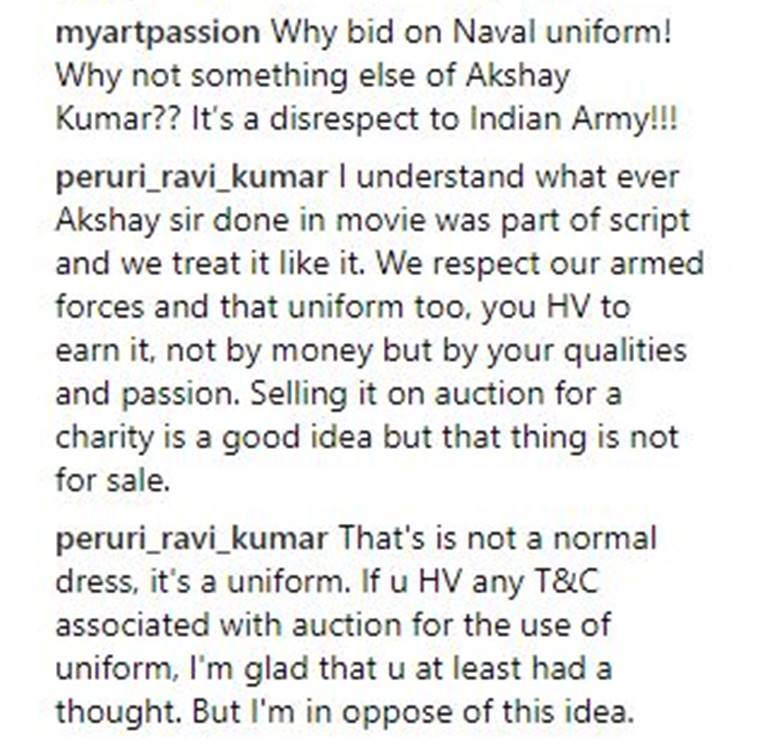 Someone even threatened violence against Twinkle by writing an open letter on Sunday, to which she responded as saying, ““As a society do we really think it’s all right to threaten a woman with bodily harm for trying to raise funds for a charity by auctioning a uniform used in a movie, a piece of film memorabilia ? I will not retaliate with violent threats but by taking legal action!” Twinkle wrote.

As a society do we really think it’s all right to threaten a woman with bodily harm for trying to raise funds for a charity by auctioning a uniform used in a movie,a piece of film memorabilia ? I will not retaliate with violent threats but by taking legal action! #JaiHind https://t.co/OF7e5lTHel

There were also a few of them who supported her and the auction. While one of them said very specifically that it was a costume and not a uniform, another one said that she was free to make her choice and do whatever she wants with the money she raises. Some even praised her for being thoughtful towards animals. Anyway what are your thoughts about the same? Let us know in the comments’ section below