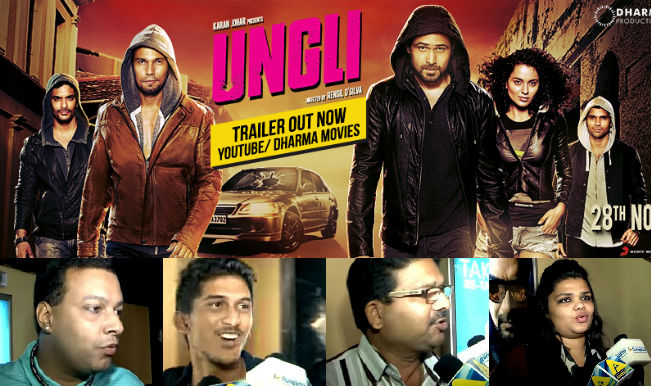 This week’s Friday saw the release of Karan Johar’s Ungli. The motivating film takes a dig on the prevalent problems related to corruption in India. With three movies lined up for release on the same day, Ungli got a fair opening on the first day at Box Office. Besides, the Rensil D’Silva venture earned a pretty well as compared to the other two films, Zid and Zed Plus. Also Read - Box Office Report: Ungli and Zid get poor response at the Box Office

Ungli revolves around four friends Abhay (Randeep, Maya (Kangana), Kalim (Angad) and Goti (Neil), who set out to take law in their hands to punish the corrupt people. Though the politicians and police are against their unruly practices, the janta loves them for what they are doing. Nikhil (Emraan) wants to be a part of the group and help them take their revenge with the help of ACP Kale (Sanjay Dutt). Also Read - Ungli movie review: Emraan Hashmi and Randeep Hooda starrer is a refreshing entertainer!

Despite its low box office collection, audience is overwhelmed with Ungli’s concept and story line. Everyone who stepped out of the theater looked gleeful and encouraged with what they got to see. A viewer said “Kafi time baad, ek acchi movie dekhne ko mili. Thought hai. Special 26 and Wednesday k baad bohat acchi movie dekhne mili. Mainstream movies se kafi alag hai ”(I am seeing a good provoking movie after a long time (after Special 26 and Wednesday). It is different from the usual mainstream movies.) The acting skills of all the stars were equally loved by the audience. Looks like the movie can make some good money over this weekend owning to the word of mouth publicity.