Vicky Kaushal fixes Katrina Kaif's hair, and together, they dance like there's no tomorrow at the Holi party of Isha Ambani which was also attended by Priyanka Chopra and Nick Jonas among others. Watch viral videos here.

Some might still not believe but there are strong speculations regarding Vicky Kaushal and Katrina Kaif‘s relationship in the industry. Even though none of them has accepted or denied the rumours, their body language and stealing quick gazes amid public speak a lot about their bonding. For the ones who still don’t believe, some new videos from the Holi party of Isha Ambani are currently going viral on social that show how Vicky and Katrina were simply inseparable at the party which was also attended by other Bollywood celebs. Also Read - Vicky Kaushal Has THIS to Say on Dating Katrina Kaif After Breaking up With Harleen Sethi

Katrina was all set to play Holi in her Anamika Khanna lehenga and a T-shirt look while Vicky appeared in his casual best wearing a pair of basic blue denim and a white shirt. In one video that’s being circulated widely on Instagram, Vicky is seen fixing the strand of hair on Kat’s face while in the other, the two are seen matching steps with their other industry friends. Check how Vicky and Katrina are dancing together in the background in this video shared by Nick Jonas: Also Read - Vicky Kaushal Finally Breaks Silence on Rumours of Dating Katrina Kaif, Says 'There's no Story at All'

And here’s the video where Vicky is seen fixing Kat’s hair:

Both Vicky and Katrina arrived separately at the party but now it seems like they were pretty much together all the time inside the venue. Other guests who were seen at the party were Priyanka Chopra who brought her American husband, Nick Jonas, to make him experience the entire Holi culture in India. Diana Penty, Huma Qureshi, Armaan Jain-Anissa Malhotra, Sonali Bendre, Jacqueline Fernandez, Isha’s mother Nita Ambani, her sister-in-law Shloka Mehta, and publicist Rohini Iyer were other few names clicked at the party. 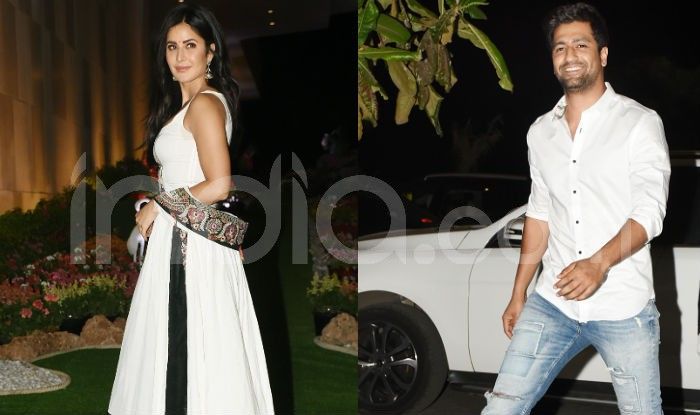 Meanwhile, Vicky and Katrina have been attending many Bollywood parties and private events together, successfully managing to keep their bonding a secret from the media. Recently, when asked about his relationship with Katrina, Vicky refused to give any straight answer and got away by making statements like ‘I am focussing on my career’, and ‘I don’t know where these rumours come from.’ Do we need more proof of their beautiful chemistry though?