It seems Priyanka Chopra's mother has turned her manager as well

Our mothers play various important roles in our lives. They are our friends, our confidantes, our biggest and most honest critics, our punching bags, our life coaches and many more! The case must have been the same with Priyanka Chopra and her mother Madhu Chopra as well. Also Read - Priyanka Chopra Jonas Shares Hilarious Memes on Her Halpern Orb Dress, Thanks The Trolls

Now, the actress’ mother has taken on a new role to make her daughter’s busy and hectic life a bit easier. Ardent fans of Priyanka Chopra might have already noticed how the mother comes to the rescue of the superstar daughter each time there is a controversy or a speculation regarding her work. She has very much gotten into the role of playing PeeCee’s spokesperson to the media. Also Read - When Priyanka Chopra Jonas Was Asked to 'go And Get Gang-Raped' in 2012 Racist Attack in The US

Whenever Priyanka is unavailable for comment, mother Madhu Chopra chips in to clear the air. We are sure her phone must be continuously buzzing of late. For it is not just the media but also Bollywood peeps who she has had to be on the hotline with! Yes, we hear that mommy Madhu has been calling the shots for Priyanka since a while now. ALSO READ: After Shah Rukh Khan, Priyanka Chopra Visits Dilip Kumar Before She Heads Back To USA – View Pics Also Read - Priyanka Chopra Jonas' Valentine's Day Was Better Than Yours, Here's How Husband Nick Jonas Surprised Her 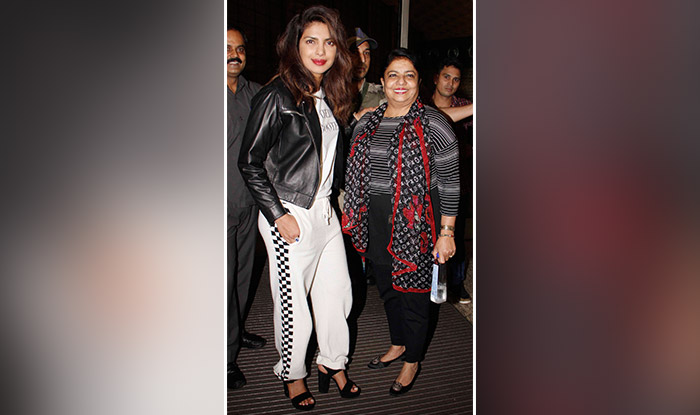 An industry insider tells India.com, “Madhu Chopra has been taking care of Priyanka’s work in her absence from the country. PeeCee has been away to the US for her international commitments since quite some time now and her mother has been the only source of communication with her. Filmmakers have had to get in touch with Madhu before getting through to the actress.”

Not just this, the source also reveals how mummyji has been actually taking decisions on the actress’ behalf. “She is reading scripts and sitting in narrations. Nothing goes to Priyanka before she gives a nod. In fact, this has also irked a few directors, who have worked with PeeCee earlier and approached her for another project,” we hear. ALSO READ: Priyanka Chopra Is Oozing Oomph In Her Latest Photoshoot – See pics

The ordeal is the same with ad makers as well the source shares. Priyanka’s mom is taking a call on which ads her dearest daughter can and should endorse and which ones can be passed. Bizarre! Let’s just hope Mummy Chopra has armed herself with all the knowledge of how the film industry works before taking on this new, major role in beti Chopra’s life. We last saw her in March 2016 film Jai Gangaajal and haven’t got any confirmation about her next Bollywood film. It’s worrying!