It's kinda cute to see Salman Khan like this, taking his first steps into the world of showbiz through a cola ad – something that years later a 15-year-old Shahid Kapoor did in a Pepsi ad with superstars Shah Rukh Khan, Kajol and Rani Mukerji. 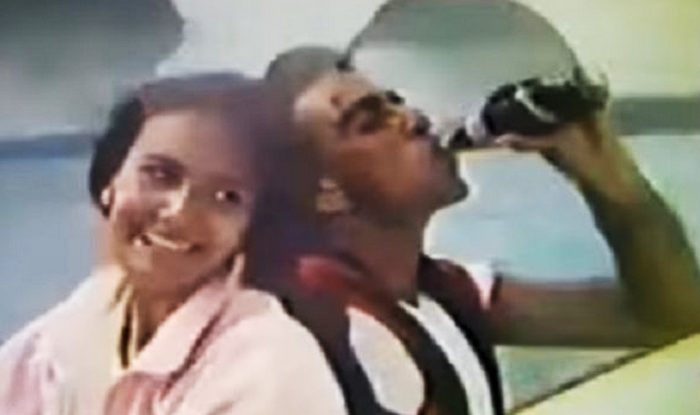 If you thought that Salman Khan deliberately did not do television commercials until he began endorsing Thums Up and Mountain Dew, take a look at this blast from the past courtesy of Campa Cola! Before he became a superstar, Salman Khan was just a newbie – albeit an elite one, being the son of celebrated film writer Salim Khan. But he had his struggling phase before he made his debut in Biwi Ho Toh Aisi in a supporting role. Salman Khan’s fortunes changed overnight when he got the lead role in Sooraj Barjatya’s directorial debut Maine Pyar Kiya. ALSO READ: Salman Khan completes 27 years in Bollywood! #27BlockbusterYearsOfSalman Also Read - Jaan Kumar Sanu's Statements on Father Kumar Sanu And Rahul Vaidya After Eviction From Bigg Boss 14

But while he shot for this Campa Cola TVC, possibly his first, Salman Khan was only 15! Although he looks a bit older in this advertisement. But what is interesting is that actor Jackie Shroff’s wife Ayesha Shroff (mom to hunk Tiger Shroff and the bold and beautiful Krishna Shroff) is seen among the group of people in the cola ad! At the time she may not have known Salman Khan will be such a huge star (not that she cares now, and why would she?). But it’s kinda cute to see Salman Khan like this, taking his first steps into the world of showbiz through a cola ad – something that years later a 15-year-old Shahid Kapoor did in a Pepsi ad with superstars Shah Rukh Khan, Kajol and Rani Mukerji. Remember? At the time nobody knew Shahid Kapoor, and look where he is today! A star, an acclaimed actor, a husband who just became a father! Also Read - Bigg Boss 14: Ekta Kapoor Throws New Twist as Contestants Reveal Hatred Towards Each Other, Gets Special Power

And look at Salman Khan, too, a megastar with many blockbusters to his credit, starting with this small ad. We think we had shared this ad long ago as one of Salman Khan’s first ads. But at the time, it was not ‘viral’ for being a Salman Khan-Ayesha Shroff starrer! Strange things happen in the online world of viral stuff, with anything catching on any time.

Take a look at the ad with Salman Khan and Ayesha Shroff and it will bring a smile to your face looking at the diminutive and very young Khan!