What made Divyendu Sharma cry?

A misty-eyed Divyendu even called his father 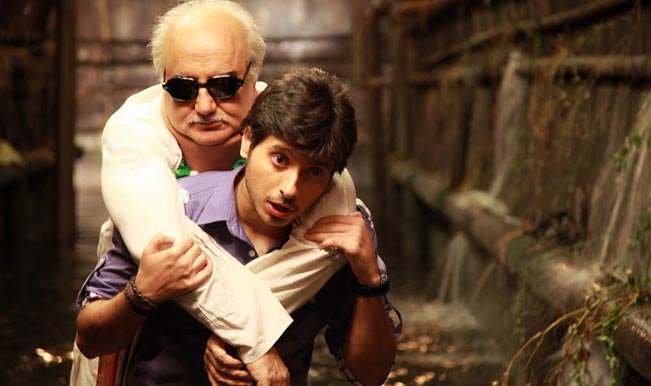 You have seen him as a vulnerable geek in Pyar Ka Panchnama and doing some funny gigs then in Chasme Baddoor. But far from those movies Divyendu Sharma is moving into completely different space now with his new movie Ekkees Toppon ki Salaami. Also Read - Anupam Kher And Kirron Kher Wish Each Other on 35th Wedding Anniversary With This Romantic Picture

Ekkees Toppon ki Salaami is a story about a son’s journey of getting recognition for his father in the society. A father-son relationship is very emotional relationship and it has been explored in this film. Also Read - Mirzapur 2: Amazon Prime Video Promises to Release Season 2, Shares Ode to Mirzapur Video

Divyendu Sharma plays Anupam Kher’s son in the film. While watching the rushes of the film Divyendu Sharma got very emotional at a particular scene. It was the one where he reads his dead father’s letter. The young actor, we hear, got misty eyed and even started weeping inconsolably.

Divyendu got so emotional that he went and called his father. He left the screening midway and had a long chat with his father. Even while shooting the scene he got very emotional.

It was a very tough shot as it required him to portray very strong emotions. And Divyendu was so moved by the scene, that he shed real tears for it. Anupam Kher and Divyendu Sharma have portrayed a beautiful father-son relationship in Ekkees Toppon ki Salaami, that is honest and realistic.

Off screen too, the two actors share a very close relationship. They have worked together in the past too. Anupam Kher is like a father to Divyendu, always guiding him and giving him honest feedback about his work.

But in Ekkees Toppon ki Salaami, Anupam Kher and Divyendu Sharma bonded a lot and got even closer. ​