Why is Katrina Kaif doing a Rambha in Kamli?

Looks like Katrina Kaif is having a dance-off with herself ultimately making her look like a total retard high on performance enhancing drugs. 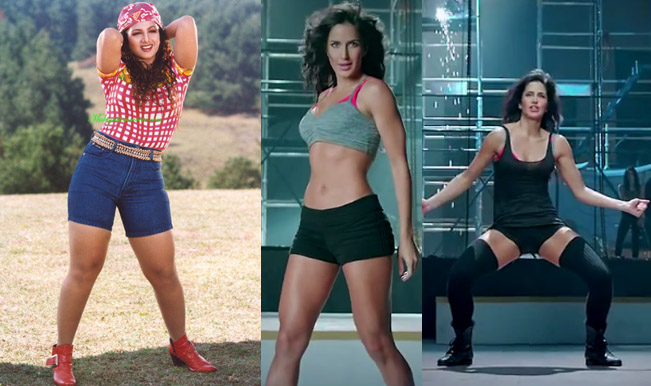 After Chikni Chameli, it felt like Katrina Kaif has learnt to dance and can really shake her booty without needing a ‘pau-aa’ but with Kamli it seems like she has forgotten everything and is doing a series of advanced robotic dance moves to prove a point. Why is the spirit of Rambha seen in her thunder thighs? We hope the well-off producers haven’t spent crores to shoot this song too. Also Read - Dear Bridesmaids, Here Are 5 Outfit Inspiration For Your Best Friend’s Wedding

First of all, her shorts as in long underwear and socks or stockings which cover over half of your lower thigh just looks like the darzi aka the designer was not paid on time and he/she decided to keep a few inches of the cloth starting from just after the groin to make her look weird. Assuming it can pass for a contemporary dance look, the makers must have thought, more the skin show, better the views but pelvic thrusts with mismatched upper body movements looks like Katrina Kaif is having a dance-off with herself ultimately making her look like a total retard high on performance enhancing drugs. Also Read - Tiger 3: Salman Khan to Begin Shoot in February? - All You Need to Know About YRF's Film

The tailor must have been really pissed off to have taken the cloth where it was needed most during the pelvic thrusts where her wobbly thighs cause anything but pleasure to the viewer. And to top it off, a Demi Moore Striptease style slow squat while again trying to make her look sensual fails to impress. Her cheesy straight faced expression like Kristen Stewart’s marvelous expression coupled with a very girly its-picture-time head tilt to her left just seals the deal for a colossal waste of time.

The collage of Booker T moves and hints of Sheila Ki Jawaani ends with Katrina losing more clothes but despite her fit upper body, one cannot miss her early Ronnie Coleman legs which obviously were the result of heavy exercises to attain the fit body.

36-28-36 stands for a hot woman’s figure according to conventional wisdom but when the first number low and the last number are high, nobody cares about the middle number. Rambha dance numbers may have worked as late as the 90s but this dance number will only impress perverts and fat a** lovers.