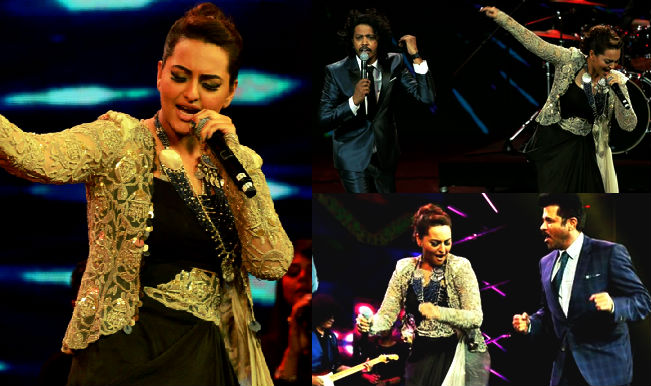 Guess who is the new singer in B-Town? It is none other than the Dabangg girl Sonakshi Sinha. Yes, the Bollywood actress has tried her hand at singing for the very first time. Sonakshi will be seen in a never before exciting first-ever performance at the IIFA 2015 Awards. Sonakshi Sinha is going to take the stage by storm with a musical performance at the IIFA Rocks which will be telecasted tonight on Colors channel. Also Read - Anil Kapoor Gifts His Wife Sunita Kapoor Swanky Black Mercedes-Benz GLS Worth Rs 1 Crore | See Pics

Sonakshi will be seen crooning to the audience in Kuala Lumpur, Malaysia at the 16th edition of the International Indian Film Academy Weekend and Awards. Sonakshi will be seen performing Har kisi ko nahi milta from Boss and Saree ke fall sa from R…Rajkumar alongside playback singer Nakash Aziz. Not only does she deliver her power-packed singing but is also seen shaking a leg with none other than Anil Kapoor. Also Read - Harsh Varrdhan Kapoor Doing A Remix Of Anil Kapoor's Film & More

With this performance she has now joined the league of Bollywood stars Priyanka Chopra, Alia Bhatt and Shraddha Kapoor, who have already tried their hand at singing projects. IIFA Music and Fashion Extravaganza will be hosted by Ayushmann Khurrana and Parineeti Chopra.