Shagun receives a good lesson for creating problem in Ishita's life but Santoshi is in a state of shock!! 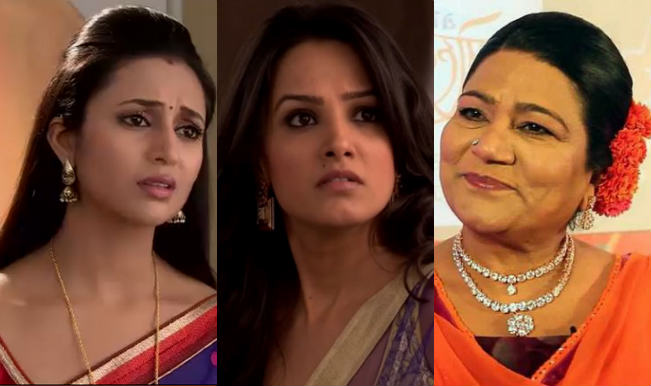 Nikhil’s truth has been exposed finally and right on time before Rinki took pheras with the fraud man. The Bhalla’s are delighted to know Nikhil’s truth that saved their daughter’s life. Raman and Romi all infuriated beat Nikhil black and blue before throwning him out of their life. Shagun who was waiting for this opportunity to blame Ishita starts on with her plans. However, the evil lady’s plans fall flat on her face as Mihika and Romy expose her plans to everyone.  (ALSO READ : Yeh Hai Mohabbatein: Mihir comes for Rinky’s rescue; proposes her for marriage!) Also Read - Yeh Hai Mohabbatein Hotties Anita Hassanandani, Aditi Bhatia And Krishna Mukherjee Enjoys Pool Time in Goa, See Bikini Pics

Romy exposes the man who ran away with his money under the pretence of curing his inability. He brings the fake doctor in front of the family and reveals that he had kept Amrita in hiding as told by Shagun. Everyone is shocked to know that Shagun kept the truth from everyone just for her personal benefits. Romy also reveals how Shagun lured him to steal money from Raman’s office. He then tells his family about his inability, which takes everyone by shock. Also Read - Uri: The Surgical Strike Actor Navtej Hundal Passes Away

Santoshi is taken back by the revelations and starts cursing Shagun for ruining her kid’s  life. Raman asks Shagun to leave the house immediately without creating much drama. Shagun’s plans have backfired on her. But she still doesn’t give up on the plans to trouble Ishita. She starts creating a scene and plans to take Adi along with her. She curses Madhavi saying that she will make Ishita’s life a hell. (ALSO READ : Yeh Hai Mohabbatein: Shagun and Nikhil’s plans to be exposed!!)

Ishita intervenes and asks Shagun to get out from their house. But, instead Shagun starts teasing her and making fun of her. Shagun teases Ishita that Raman doesn’t love her and the two have never said I LOVE YOU to each other till date. This angers Ishita to has been trying to keep her calm all the time. She gives Shagun a tight slap on the face as an answer to her question.

The all shocked Shagun tries to slap Ishita back bur is stopped by Raman. Shagun blackmails them saying that she will never allow them to meet Adi and leaves. Santoshi is all shocked and upset with the events of the day. She starts wondering what has made her kid’s life so troublesome. Santoshi overthinks the matter so much that she falls ill. Her BP shoots up suddenly creating panic amongst everyone.

Now, that Shagun has taken Adi along, will Raman reopen Adi’s custody case to bring him back home? How will the Bhalla’s deal with Romy’s truth? Will Sarika come back to Romy and marry him? (ALSO READ : Yeh Hai Mohabbatein: Raman decides Sarika is the best life partner for Romi!)