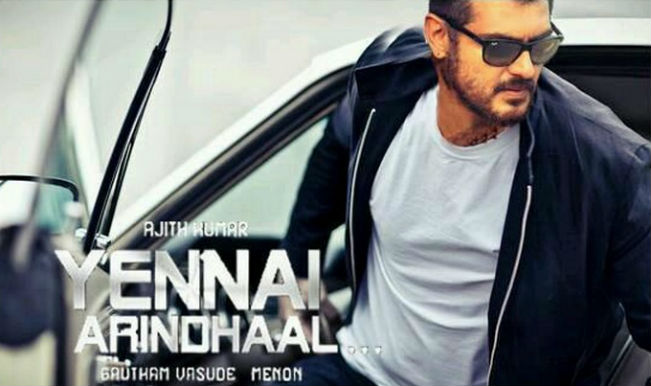 ‘There is a thin line that seperates a good and a bad guy. When circumstances push you to the brink, which are you on?”, is the theme of Gautam Vasudev Menon’s much awaited Ajith starrer, Yennai Arindhaal. Also Read - Ponniyin Selvan Actor Vikram Says Being Aishwarya Rai Bachchan is 'Very Difficult': 'Wasn't Just About Beauty'

Chronicling the life of Satyadev(Ajith), the screenplay moves back and forth from present day to his battles and love life in the past and the mystery unfolds in a seamless manner. A young, bearded Satyadev is shown as a dreaded gangster, spending his time in jail. He befriends Victor (Arun Vijay in a riveting performance) and flees prison. After acclimatizing with Victor’s aides, it is revealed that Satyadev was working undercover and nabs a big network, thereby antagonizing Victor. Also Read - Ponniyin Selvan 1 Hindi Trailer: Aishwarya Rai Bachchan as Nandini is The Highlight of Mani Ratnam's Magnum Opus - Watch Video

There is a romantic track with Trisha, a single mother who is killed under mysterious circumstances. The perils of a cop’s life and how the murderers are nabbed down forms the rest of the story.

The first half is racy and Dan McArthur’s camerawork is a sheer delight. The songs by Harris Jayaraj are already chartbusters but the background music is loud at places and could have been worked out better. Anushka Shetty also plays a pivotal role and has the meatier role of the heroines and so does Trisha’s daughter, who is adopted by Satyadev. There also an episode about illegal organ trade, which is an integral part of the story in the latter half. A father-son, father-daughter bond that tugs heartstrings.

Dialogues add spark to the film and so do of the fight sequences. There are plenty of gunshot exchanges, which does get weary after a point and the running time of the movie stretches to three hours, which are one of the few sore points in the film. Also the movie has traces of the director’s previous films, Kaaka Kaaka and Vettaiyadu Villayadu (cop films again). Ajith looks dapper and delivers a knockout performance and so does Arun Vijay, who shares almost equal screen space.

With recent big budget-big star movies disappointing, Gautam Vasudev Menon bounces back to winning ways with this action thriller, which has a winner written all over it. Ajith’s large legion of fans are sure to have a treat with this one.