Zoya Akhtar expressed dissatisfaction over the exponential rise in the bill. She is shocked by her whopping electricity bill.

Filmmaker Zoya Akhtar is the latest Bollywood celebrity to complain about the inflated electricity bill. Residents across Mumbai have been complaining about abnormally high electricity bills, which they received after the lockdown. On Thursday, filmmaker Zoya Akhtar also expressed dissatisfaction over the exponential rise in the bill. She shared a screenshot of her electricity bill with the name of the service provider Adani Electricity. The bill shows a due amount of Rs 58,550.Also Read - MP Woman, Who Lives in a Hut With Just a Bulb & Fan, Receives Rs 2.5 Lakh Electricity Bill 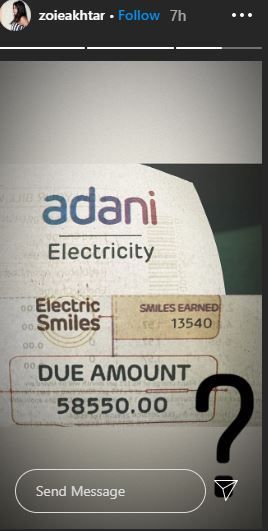 Actors Nimrat Kaur, Soha Ali Khan and Neha Dhupia also shared the same post on inflated electicity bills. “So like everyone else, I’m struck too @Adani_Elec_Mum. Time to explain this calculation. We can at least be heard here, what about all those who can’t?! #Shockdown,” tweeted Nimrat Kaur on Wednesday. Also Read - Javed Akhtar on if He Finds His Children Smoking Marijuana: I Would Tell Them Not To Do It, It's Not Right

“Are we just meant to accept these inflated electricity rates and pay them? @Adani_Elec_Mum we have received a bill that is three times our usual amount. Could you please explain?,” shared Soha Ali Khan. Reacting to Soha’s tweet, Neha Dhupia wrote: “Yes…. same here.. can someone reply from @Adani_Elec_Mum so that we are not left in the “dark”…”

The electricity bill issue got highlighted on Sunday when Taapsee Pannu slammed the company for an inflated electricity bill, and also for serving her a bill for a house where no one has been living for a while. She wrote, “3 months of lockdown and I wonder what appliance(s) I have newly used or bought in the apartment only last month to have such an insane rise in my electricity bill @Adani_Elec_Mum. What kind of POWER are you charging us for”.

The spokesperson of Adani Electricity Mumbai Limited responded to Taapsee’s complaint and wrote, “We have re-started physical meter reading which was temporarily halted since March because of Covid-19. Bills were generated on the lower side, being an average of preceding three months Â– that is, December, January and February, which are winter months. Actual consumption in the months of April, May and June is comparatively higher due to seasonal impact (summer) and increased usage (advent of Lockdown/WfH)”.