Raksha Bandhan is about the promise of trust and care. It's a celebration of bond between a brother and a sister.

Raksha Bandhan 2018 or Rakhi 2018, as it is more popularly known as, is being celebrated on August 26 this year. The festival of the promise of trust and care, it’s a celebration of bond between a brother and a sister. While the festival is said to have found its roots in the Hindu culture, it doesn’t limit itself to any particular religion, caste, community or place today. Also Read - India vs England 4th Test Southampton: Virat Kohli's Sister Bhawna Responds to Cricketer's Rakhi Message And it Will melt Your Heart

In the most common way to celebrate Raksha Bandhan, a sister ties a thread on the wrist of her brother, as a sign of love and respect. The brother, in lieu, gives a promise of an eternal care and protection. While there are several stories around the origins of this festival in the Hindu mythology, no claim can be made regarding its actual presence in the history. Among many stories that are being told, one belongs to the age of Mahabharata in Kalyuga. Also Read - Raksha Bandhan 2018: India Captain Virat Kohli Shares Throwback Picture With Didi 'Bhawna'

It is said that Lord Krishna, once while flying a kite, cut his finger. Princess Draupadi, on seeing the blood dropping from his finger, ran towards him, tore a piece of cloth from what she was wearing, and tied it to his finger. Touched by the gesture, Krishna promised Draupadi that he will always protect her and come to help her whenever she will ask him. Also Read - Raksha Bandhan 2018: Priyanka Chopra, Deepika Padukone, Sara Ali Khan And Other Celebs Shower Love on Their Siblings 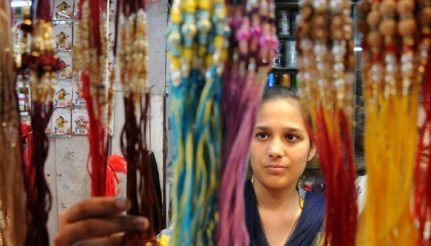 Another Hindu mythology legend has it that the king of demons, Bali, worshipped Lord Vishnu and asked him to stay with him in his kingdom in return. That made goddess Lakshmi, Lord Vishnu’s wife, quite uncomfortable, and she thought of a trick to get her husband back to live with her. She tied a holy thread on the wrist of King Bali, thereby making him her brother. When the king asked the goddess to make a wish, she asked her husband, Lord Vishnu, to be sent back with her freely. The king granted her wish out of respect for the holy thread that built a new relationship of brother-sister between him and the goddess Lakshmi. 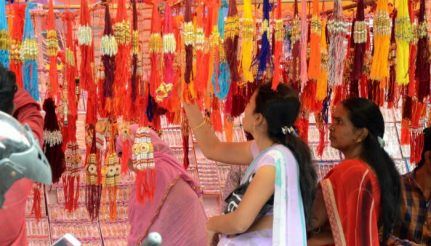 One of the myths around Raksha Bandhan is that it’s confined to only one religion — Hinduism. However, this bond of everlasting love and trust is observed by many across religions. In another legend, Rani Karnawati of Chittor sent a Rakhi to Mughal emperor Bahadur Shah Zafar in the mid 16th century, when he attacked her kingdom. However, after receiving the Rakhi from her, he called off the attacks and returned, giving a promise of lifetime protection to the queen.

Raksha Bandhan, today, is celebrated beyond its traditional practice. Not just sisters, brother also tie a Rakhi on their sister’s wrist asking them for a promise of protection. Women tie the holy thread on the wrists of soldiers who spend days and nights protecting the borders of our country. At some places, people tie Rakhi on the branches of trees, for their selfless act of providing us with shelter, food, and fresh air, and therefore, protecting our lives.