Brazil through to quarter-finals as Chile pay penalty

Brazil advanced to the quarter-finals of the World Cup on Saturday after holding their nerve to down Chile on penalties. 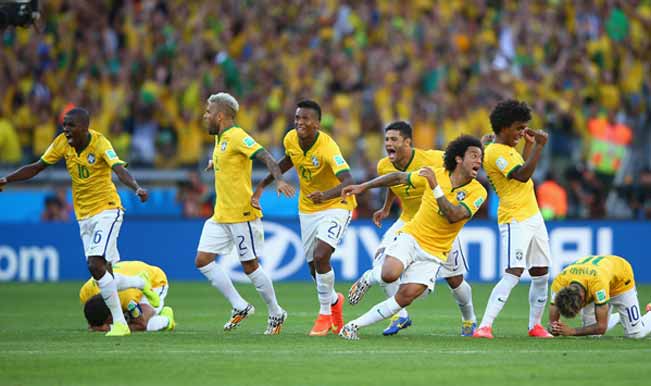 RIO DE JANEIRO, June 29: Brazil advanced to the quarter-finals of the World Cup on Saturday after holding their nerve to down Chile on penalties. Also Read - National Security Advisors of BRICS Nations to Hold Virtual Meeting on Thursday

Brazil goalkeeper Julio Cesar was the hero, saving twice in the shoot-out before Chile defender Gonzalo Jara’s final spot-kick crashed off the woodwork to hand the World Cup hosts a 3-2 win. Also Read - With Spike of Over 90,000 Cases, India's Tally Crosses 42 Lakh-mark; Second Highest After US | Key Points

The shoot-out drama unfolded after a pulsating game at Belo Horizonte’s Mineirao Stadium after 120 minutes of normal and extra-time ended with the South American rivals locked at 1-1.

Brazil, roared on by their partisan support, started strongly, taking the lead through a goal credited to David Luiz after 18 minutes.

Neymar swung a corner in from the left and the Paris Saint-Germain defender rose to turn the ball into the net although replays showed it was helped on by Chile defender Gonzalo Jara.

But Chile came roaring back and equalised after 32 minutes, Barcelona star Alexis Sanchez punishing slack play in the penalty area to slot past Julio Cesar.

Brazil had a goal controversially disallowed in the second half, when striker Hulk was adjudged to have used his arm to control a long ball before shooting past Claudio Bravo.

A thrilling finale to extra-time almost saw Chile snatch a sensational victory when striker Mauricio Pinilla saw a shot crash back off the woodwork in the dying seconds with Cesar beaten.

Later Saturday, a Uruguay team fuelled by a sense of injustice face Colombia at the Maracana Stadium in the day’s other last 16 clash.

Uruguay have adopted a siege mentality after Luis Suarez was kicked out of the World Cup on Thursday for biting, insisting the star striker is innocent.

Coach Oscar Tabarez angrily hit out at Suarez’s treatment in his eve-of-match press conference on Friday, insisting the player had been made a “scapegoat.”

And Tabarez warned the controversy had left his players determined to extend their stay at the World Cup.

“We are hurt, but with our outstanding force and more than ever tomorrow (Saturday), we will do our utmost,” Tabarez declared.

As Uruguay prepared for Saturday’s battle, further details of the disciplinary hearing which led to Suarez’s worldwide four-month ban from football emerged.

According to a copy of the FIFA disciplinary committee judgement seen by AFP, Suarez denied biting or attempting to bite Italy’s Giorgio Chiellini.

He claimed he had lost his balance before the incident and stumbled into Chiellini’s shoulder.

“I lost my balance and ended up falling on my opponent (Chiellini),” Suarez said in his submission to the panel.

“At that moment, my face hit the player (Chiellini) leaving a small bruise and sharp pain in the teeth.”

“In no case what has been described as a bite or attempting to bite happened.”

The panel also noted in its judgement Suarez had not “any repentance, remorse, or acknowledgement” of wrongdoing.