FIFA World Cup 2014 hosts Brazil take on Chile for the first Round of 16 match at Estadio Mineirao in Belo Horizonte. Catch the live streaming of the Brazil vs Chile match here. 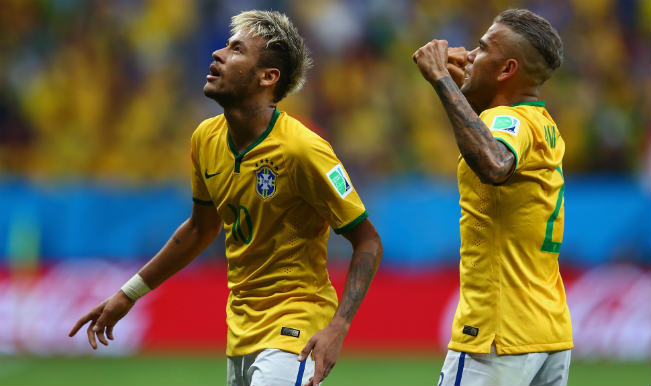 FIFA World Cup 2014 hosts Brazil take on Chile for the first Round of 16 match at Estadio Mineirao in Belo Horizonte. Brazil have won two and drawn one game while Chile have won two and lost one. The encounter is an interesting match-up and will see great attacking-plays for sure. Also Read - Chennai Super Kings vs Delhi Capitals, 7th Match, Dream11 IPL 2020 Dubai Live Streaming Details: When And Where to Watch Online, Latest CSK vs DC, TV Timings in India, Full Schedule, Squads

You can watch the live streaming of the Brazil vs Chile match in India at livsports.in and for the viewers in USA, you can watch the match on Espn.go.com.  Football lovers can watch the live telecast of this match at Sony Six TV Channel. The kick off time is 4:00 PM GMT (9:30 pm IST, June 28). Also Read - Kings XI Punjab vs Royal Challengers Bangalore, 6th Match, IPL 2020 Dubai Live Streaming Details: When And Where to Watch Online, Latest KXIP vs RCB, TV Timings in India, Full Schedule, Squads

Chile have conceded 11 goals in their three meetings with Brazil at the World Cup finals, an average of 3.7 per game.

Eduardo Vargas has scored in each of his last two appearances for Chile against Brazil, including a goal in Belo Horizonte in April 2013.

Brazil have scored two or more goals in each of their last nine matches against Chile, netting 32 in the process (3.6 per game).

Neymar has now scored four times in three matches at the 2014 World Cup and eight times in his last six for Brazil.

Four of Chile’s five goals so far at the 2014 World Cup have arrived before half-time, with the other coming in the 90th minute.

Brazil have won their last five second round matches at the World Cup, scoring 13 and keeping four clean sheets.

The last time that Brazil lost a World Cup match in the second round of the competition was back in 1990; losing 0-1 to eventual finalists Argentina.

Overall, Brazil have lost only one of their last 10 World Cup matches against South Americanopposition (W8 D1).

Chile have lost all four of their World Cup matches against fellow South American opposition, although three of those games were against Brazil.

Chile have never beaten the Selecao on Brazilian soil, losing 20 and drawing six.

The Seleção are now unbeaten in 40 successive matches in Brazil, with their last defeat coming against Paraguay (0-1 in a friendly) in August 2002.

Catch the Live Updates of the Brazil vs Chile match here