Uruguay return to the scene of their greatest triumph on Saturday looking to bury headlines about the disgraced Luis Suarez in their World Cup last-16 showdown with Colombia. 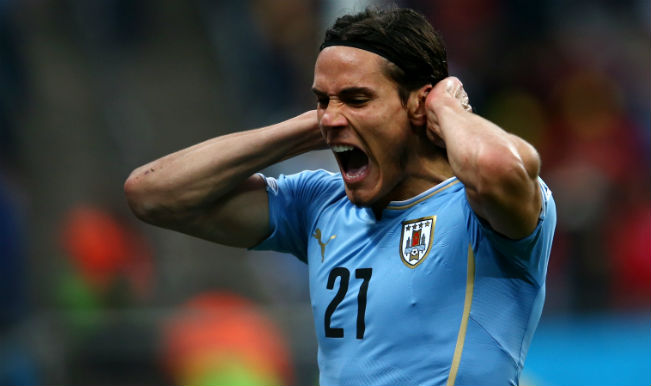 Sixty-four years on from their sensational 2-1 win over hosts Brazil in the deciding game of the 1950 tournament, La Celeste are back at the Maracana, and once again the eyes of the world are upon them. Also Read - Football Transfer: Luis Suarez Leaves Barcelona For Atletico Madrid

Suarez’s four-month ban from all footballing activity for biting Italy’s Giorgio Chiellini means that he will not be present, having flown back to Montevideo on Friday, but his spectre looms large over the fixture nonetheless. Also Read - Man Jumps Off Bike to Save Toddler From Rolling Down Steep Road, Video Goes Viral

The 67-year-old said that the Liverpool striker had been made a “scapegoat” and stood down from his position on FIFA’s technical study group and strategic committee in protest.

Tabarez also suggested that Uruguay’s players will use the matter as a source of extra motivation when they take to the field against their South American rivals Colombia.

“To the Uruguayan fans: they, like us, are moved by the resonance of this punishment,” Tabarez said during a sombre monologue that drew a round of applause from watching Uruguayan journalists.

“I want to let them know that we are hurt, but with our outstanding force and more than ever tomorrow (Saturday), we will do our utmost.”

In Suarez’s absence, veteran forward Diego Forlan is expected to come into Uruguay’s frontline alongside Edinson Cavani, as he did when Suarez missed his side’s opening game — a 3-1 loss to Costa Rica — through injury.

While Tabarez refused to answer questions from journalists on Friday, he has previously expressed confidence about his team’s ability to cope without their troublesome talisman.

“If one player is suspended, another one will play,” Tabarez said.

“We’ve already played lots of matches without Suarez. We’ve won some, and we’ve lost some, and he wasn’t there against Costa Rica either.”

Colombia coach Jose Pekerman was reluctant to discuss Suarez while conducting his own pre-match media duties on Friday, saying only that his side’s “sole concern” was “Uruguay as a team”.

Pekerman guided his native Argentina to the quarter-finals of the 2006 World Cup in Germany and he will be breaking new ground with Colombia if he repeats the feat on Saturday.

On Colombia’s only previous last-16 appearance, at the 1990 tournament in Italy, a team captained by Carlos Valderrama lost 2-1 to Cameroon, with Roger Milla scoring twice in extra time.

Then, Colombia had squeezed into the knockout phase as one of the four best third-place teams, but in Brazil they cruised into the last 16 with a game to spare and won all three of their group-stage matches.

Pekerman, though, is wary about reading too much into his side’s form ahead of an encounter with a team who finished fourth at the last World Cup before triumphing in the 2011 Copa America.

“They’re one of the great teams in the world, because of their cycle, their history. We’re just starting, and hopefully we can continue.”

Having made eight changes for Tuesday’s 4-1 win over Japan, Pekerman will restore several first-team players to his starting line-up, with in-form playmaker James Rodriguez and striker Teofilo Gutierrez among those expected to come in.

Colombia will be buoyed by the memory of a 4-0 win over Uruguay in South American qualifying in September 2012, although they went down 2-0 in the return fixture a year later.