It''s been exactly one week since the FIFA World Cup 2014 opening ceremonies, this has probably been the most anticipated event in world history after Judgement Day. 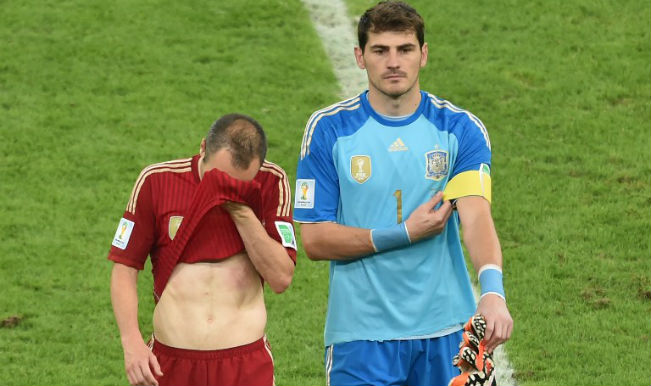 Well it’s been exactly one week since the FIFA World Cup 2014 opening ceremonies, this has probably been the most anticipated event in world history after Judgement Day. It’s been just a week, a seemingly insignificant amount of time, but not during football season. Also Read - Rashid Khan: I Will Get Married Once Afghanistan Win The Cricket World Cup

This week’s matches have left the world in shock and awe proving the fact that facts and rankings can mean jack in a game as unpredictable and unbiased as football. If this World Cup has shown us anything it’s that even underdogs can stick it to the big boys in fact this isn’t an exception, it’s practically becoming the norm. Also Read - Still Trying to Work Out if it Was High or Low: Kane Williamson on World Cup Final

We’ve seen  celebration, heartbreak, routs, victories, defeats and hot fans, and the FIFA World Cup 2014 is only just warming up, surely it can only get more exiting in the weeks to come, here’s a list of some matches nobody would have ever thought possible, but happened anyway, because in football anything is possible: Also Read - Robin Uthappa Believes he Still Has a World Cup Left in Him, Says 'You Can Never Write Yourself Off'

1) The Spain vs Netherlands Match: This match started off with a team comprising of the defending world champions with some of the best players in all of footballdom up against a team ranked 15th. Victory looked almost certain for the Spaniards until the Dutch went all out and scored 5 goals against Spain’s measly 1, this gave the Spanish team the hard knock they needed to realise that they aren’t invincible. Surely Spain wouldn’t lose again. Wrong!

2) The Spain vs Chile Match: If you thought losing to your arch rival was bad how about losing to a team that placed 10th in a World Cup you came 1st in? (that is the  FIFA World Cup 2010). Well Spain did something unexpected (yet again), that broke millions of hearts (yet again), they lost (yet again) to the Chilean Football team 0-2  resulting in their elimination from the FIFA World Cup 2014. The world champions of 2010 didn’t even make it to the semi finals!

3) The Uruguay vs England Match- England truly has some world class players, but that didn’t stop them from being beaten by Uruguay 2-1. This defeat compounded by England’s defeat at the hands of Italy in a previous match which means that England is pretty much out of the World Cup.

4) The Netherlands vs Australia Match: After completely decimating Spain the Dutch football players must have felt like Gods (you would too if you could score a goal with a header like van Persie did) but their euphoria was short lived after they were (quite ironically) almost beaten by an underdog team, Australia. The Dutch did finally manage to win (by scoring 3 goals against Australia’s 2) but one cannot forget how brilliantly the Australians played despite overwhelming odds, and that’s what football is all about, teamwork and dedication, not money, endorsements and Pitbull songs.

5) The Germany vs Portugal Match: Two extremely strong teams went head to head in what fans assumed would be an epic battle, well it wasn’t. It was a complete disaster for the Portuguese, they lost 4-0. Surely a match all of us football fans are eager to watch is Germany vs. Netherlands, we hope these two teams get to go up against each other at a later stage in the World Cup.