Brazil take on Chile for the first game of the Round of 16 at the Estadio Mineirao in Belo Horizonte. Catch the live updates of the Brazil vs Chile match here. 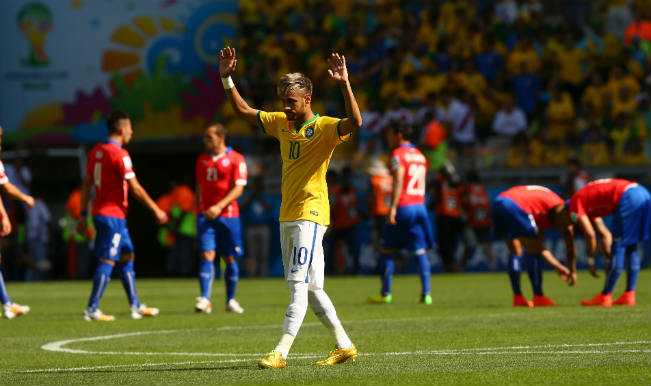 All eyes are on Neymar tonight (Getty Images)

Brazil win 3-2 on penalties to go through to the quarter-finals! The hosts were held to a 1-1 draw but then won the penalty shoot-out to claim a place in the next round. Also Read - Rashid Khan: I Will Get Married Once Afghanistan Win The Cricket World Cup

(Read: Brazil through to quarter-finals as Chile pay penalty) Also Read - Still Trying to Work Out if it Was High or Low: Kane Williamson on World Cup Final

7 – Brazil have now reached the Quarter Finals in each of the last seven editions of the World Cup. Regular. Also Read - Robin Uthappa Believes he Still Has a World Cup Left in Him, Says 'You Can Never Write Yourself Off'

CHILE 5: Gonzalo Jara steps up… runs to take it… and MISSES! His attempt hits the post! (BRAZIL 3-2 CHILE)

BRAZIL 1: David Luiz takes the 1st penalty and scores! Left side of the goal! Bravo went the other way.

Claudio Bravo has been sensational today! Will he be the hero in penalties? #BRA #CHI #WorldCup pic.twitter.com/0s13Kjjkop

Both managers are deciding who will take the penalties for their side. Lot of tired legs out there.

(ET) 120 Mins: POST!!! Mauricio Pinilla with a cracking effort from far out! it beat Cesar and hit the cross-bar! How close were Chile! They almost knocked-out the FIFA World Cup 2014 hosts – Brazil!

5 – Before today, #BRA had failed to score a single goal in any of their last five appearances in World Cup extra-time. Exhausted.

(ET) 112 Mins: Brazil win a free kick at a good position. Alves hits it from miles out and wastes the opportunity.

(ET) 107 Mins: Brazil win a corner. Neymar takes it and Jo heads over.

Second-half of Extra time: 15 more minutes for either side to come up with a winner before going into the penalty shootouts.

(ET) 101 Mins: Good ball from Hulk finds Oscar at the back post but his header lacks power. Easy catch for Bravo.

(ET) 92 Mins: Jo is left with only the keeper to beat but the striker raises his leg high to foul Bravo instead! Yellow card for the striker!

First-half of Extra time: Chile gets the game going past the 90 minute mark! Hulk is brought down at the left side. Free-kick to Brazil. Neymar fires it in but it’s headed away by the Chilean defence.

Due to it being the knock-out stage, every game at the end of 90 minutes which ends in a draw will have an extra half an hour divided into two halves for a real winner. If the scores are still a draw at the end of 120 minutes, there will be a penalty shoot-out.

90 Min: Looks like the match will go on to extra-time as no one really risked to get the winner yet!

83 Min: SAVE! Another Bravo save keeps Chile in the game! Hulk twists and turns, dodging Brazil’s defence using great footwork before taking it on his right and rifling it at goal! Bravo’s save falls back to Brazil in the penalty area but the confusion is too much and it’s later collected by Bravo!

80 Min: SAVE! Dani Alves runs down the center and chips the ball towards Neymar who heads at goal! Bravo saves it well to deny the star!

Ronaldinho got to play with Ronaldo and Rivaldo. Neymar gets Fred and Jo

74 Min: HUGE CHANCE! Hulk goes on a surging run out on the left side before sending in a sweet cross which falls perfectly for Jo to connect but the striker completely misses the ball! Oh wait, replay shows that Mena actually got his foot to it to take it away from Jo for the tap-in but Howard Webb still gave a goal-kick.

67 Min: Hulk goes down in the box but it’s a great defensive block from Aranguiz. Hulk wants a penalty for that clash of bodies! For a guy who is beefy and named Hulk, he goes down way too easy! His name should be Sulk.

64 Min: SAVE! Cesar keeps Brazil in this! A shot by Arranguiz from close range brings out a great instinctive save from the keeper after a great Chile play.

6 – Fernandinho has committed six fouls so far in #BRAvsCHI Hatchet.

62 Min: The past ten minutes have been full of break in plays due to several free-kicks. Both sides taking it easy at the moment. Chile are frustrating Brazil though!

54 Min: GOAL!!! Hulk!!! But wait! He used his hands to control a great cross from Marcelo to bring the ball down before finishing off well! NO GOAL! And Hulk is given a yellow for that! Howard Webb is always around controversy, isn’t he?

Fred loves to be hated. He also wants to start a war. #BRAvCHI https://t.co/y0LaBdg2w8

46 Min: By the way, the Brazil goal isn’t credited to David Luiz but it’s going to be counted as a Chile own goal by Gonzalo Jara!

Second-half: Webb gets the game going again and Brazil kick-off! No substitutions so far!

45 Min: Sanchez plays in Aranguiz and he should score but it’s a good save from Cesar after which there’s a lot of confusion and it ends up for a corner!

42 Min: Dani Alves tries a shot from outside the penalty area and really tests Bravo there! The Chilean keeper does well to tip it over!

39 Min: Oscar finds Neymar who brings it down brilliantly and then turns inwards on goal but Vidal blocks his run and with the confusion the ball falls to Fred who shoots over the goal! It was too quick for the striker to finish!

34 Min: Great cross in from Oscar finds the leaping head of Neymar, the star’s attempt is deflected just an inch or two wide off Francisco Silva’s body!

32 Min: GOAL!!! Alexis Sanchez gets the equalizer! 1-1! An outside throw by Brazil is hashed up and a pass by Vargas finds Sanchez dashing towards goal in the D and he finishes well! We have a great game here!

25 Min: Neymar again sprints into the box and it’s a good chance for Brazil’s poster-boy but he drags his left footed effort well wide! We know what he was going for but he just couldn’t wrap his foot around it there!

David Luiz pokes in from close range to open the scoring for #BRA 1-0 #CHI https://t.co/3uKRlMWMbU #WorldCup

12 Min: PENALTY CLAIM! Hulk exchanges passes with Neymar who sends him chasing a through-ball into the penalty box but Hulk falls down lightly! Everyone wants a penalty! There’s no way someone so huge like Hulk would actually pushed like that! Nice try by Hulk!

5 Min: CHANCE! Hulk swings it in and it falls to Marcelo on the edge of the box and he fires just wide!

Kick-off: Brazil sets up with a 4-3-3 formation while and Jorge Sampaoli opts for a Chile 5-3-2 formation with their flying wing backs. We should certainly have a good attacking game of football here!

Brazil take on Chile for the first game of the Round of 16 at the Estadio Mineirao in Belo Horizonte. David Luiz has shaken off a lower back complaint in time to take his place in the centre of Brazil’s defence in Saturday’s World Cup last 16 tie against Chile in Belo Horizonte. For Chile, Arturo Vidal returns to the starting line-up at the expense of Felipe Gutierrez.