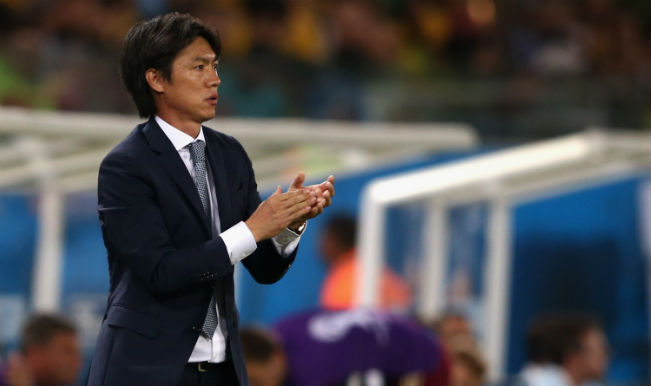 SAO PAULO, June 27: Korea Republic coach Hong Myung-Bo said he was considering his future on Thursday after taking the blame for his team’s winless exit from the World Cup. Also Read - Rashid Khan: I Will Get Married Once Afghanistan Win The Cricket World Cup

Hong said his “shortcomings” were at fault for South Korea’s failures, culminating in a 1-0 defeat to Belgium that left them bottom of Group H with one point. Also Read - Still Trying to Work Out if it Was High or Low: Kane Williamson on World Cup Final

But he also said South Korea’s young team needed to stick together and indicated that he would like to be in charge at next year’s Asian Cup. Also Read - Robin Uthappa Believes he Still Has a World Cup Left in Him, Says 'You Can Never Write Yourself Off'

“All of our players did their utmost, they gave it their all but I think it was my shortcomings, my failings as a coach that caused this result,” he said.

When asked whether he was considering resigning, Hong said: “It’s difficult for me to say right now. But it’s something that I will decide later on.”

He added: “I personally am not swayed by people’s opinions, I make my own judgement. So I will make the decision, that’s what I’ve done up until now. I don’t know what will happen but right now I’m willing to accept whatever is given.

“But I can only repeat that I started with this team and I believe we have to stick together until the end. I want to be responsible for this team until the very end.”

Hong was speaking a day after Alberto Zaccheroni resigned as Japan’s coach after the Blue Samurai also left the competition without a win.

The 45-year-old, South Korea’s captain during their run to the 2002 World Cup semi-finals, only took over as coach in June last year after the resignation of Choi Kang-Hee.

Hong, who also apologised to South Korean media for the team’s poor performance, said the World Cup had been an important learning experience for his players.

“My goal was not to have any regrets. I think we weren’t good enough but we nevertheless did our best,” said Hong.

“More than anything, I think it was important for our players to play on such a big stage and gain experience.”