Struggling Korea Republic will need to rediscover the magical spirit of 2002 as they fight to rescue their dismal World Cup campaign against unbeaten Belgium. 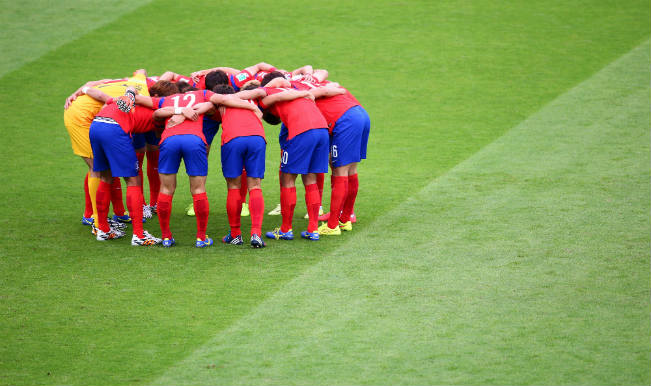 After drawing with Russia and losing 4-2 to Algeria, Group H’s bottom side need to win big against already-qualified Belgium if they are to stay in the tournament. Also Read - Rashid Khan: I Will Get Married Once Afghanistan Win The Cricket World Cup

Logic decrees the Koreans will soon be following Japan home as their attack has been largely toothless so far, coupled with severe problems in defence. Also Read - South Korea Puts Up Breathtaking Drone Show to Thank Doctors, Remind People About Covid-19 Measures

But coach Hong Myung-Bo can draw at least on his experiences at the 2002 tournament, when he was part of the team that shocked the world by reaching the semi-finals.

That year, the unquenchable desire of Guus Hiddink’s team and some favourable refereeing decisions helped the Taeguk Warriors upset Portugal, Italy and Spain.

This time around, things have been different. The 1-1 draw with Russia owed much to Igor Afinkeev’s goalkeeping howler, and South Korea were then taken apart by unfancied Algeria.

“Now we have to turn the page,” said Hong after the Algeria defeat. “This result is the reward for our preparation. We must prepare better for the next game, it’s our only option.”

On-loan Arsenal striker Park Chu-Young remains goalless and Hong had some choice words for his defence after they conceded three in the first half against Algeria.

In South Korea’s favour is that Belgium, who are top of the table with maximum points, are expected to rest some of their first-choice players.

Centre-back Thomas Vermaelen looks set to miss out with a hamstring strain but coach Marc Wilmots may give more game time to Chelsea’s Eden Hazard, who is yet to hit top form.

“I haven’t played well yet at this World Cup but I’ve made a difference and that’s what the coach has asked of me,” Hazard said this week.

“I understand that people expect a lot of me and I know I can do better.”

Although Belgium have a spine of top-level stars in Thibaut Courtois, Vincent Kompany, Hazard, Marouane Fellaini and Romelu Lukaku, it’s a new face who has been making headlines.

Divock Origi, 19, from Hazard’s former club Lille, is the latest headline-maker off the production line with two sparkling substitute appearances including the winner against Russia.

“It hasn’t sunk in what’s happening to me. Playing at a World Cup, scoring at the Maracana in front of my parents and my sister. It’s crazy,” said the teenager.

His emergence only intensifies the troubles of Hong, who would have hoped to have been in a slightly better position come their final group game.

But the 2002 veteran will hope his preparations finally come right and that South Korea can miraculously extend what is their eighth successive World Cup finals campaign.