Dirk Kuyt hailed Louis van Gaal as the most tactically adept coach in the game after he masterminded the comeback against Mexico. 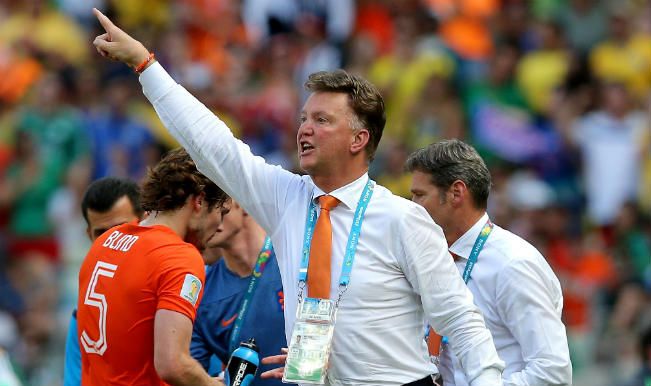 Also Read - Rashid Khan: I Will Get Married Once Afghanistan Win The Cricket World Cup

FORTALEZA, June 30: Dutch centurion Dirk Kuyt hailed Louis van Gaal as the most tactically adept coach in the game after he masterminded the comeback against Mexico that saw the Netherlands into the World Cup quarter-finals. Also Read - Still Trying to Work Out if it Was High or Low: Kane Williamson on World Cup Final

Kuyt played in three positions throughout the 90 minutes on his 100th appearance for his country. He started in an unfamiliar role at left-back before moving to right-back and eventually up front as the Netherlands played catch up after Giovani dos Santos had scored for Mexico. Also Read - Trending News Today May 13, 2020: WE WANT THE SAME! Candle-Light Dinner Dates in 'Quarantine Greenhouses' Amps up Romance in Times of Corona at Amsterdam

“He’s maybe the best tactically there is in the world,” said the 33-year-old former Liverpool striker who is now with Fenerbahce in Turkey.

“It doesn’t matter what system we are playing the players know exactly what to do.

“He told us before the game already that we could switch system if we were 1-0 down.

“We switched to 4-3-3 then 15 minutes before the end of the game he decided to put an extra striker to play longer balls and looks for second balls and we managed to score a goal so his tactics were once again spot on.”

Robben admitted he had dived earlier in the match, but insisted he had been fouled for the match winning kick.

The Netherlands’ recovery was even more remarkable given the searing heat and humidity with which the game was played in Fortaleza, which became the first in which cooling breaks at the half-hour mark of each half were allowed in a World Cup match.

“Just as I started playing in the shadow he put me to the other side in the sun again,” joked Kuyt.

“It was tough, but you know you have to keep going.”

And van Gaal lauded the physical and mental fortitude of his side to come back.

“The players showed they had faith and belief until the very end,” said the newly appointed Manchester United boss.

“The humidity was not in our favour so when you see that until the very last minute we were fresher and fitter than the Mexicans that is a big compliment to my players.

“Not only did they have belief but physically they prepared so well to play this match. That of course gives us enormous confidence going forward.”

However, Van Gaal also admitted that the cooling breaks had allowed him to make tactical switches with more ease.

“It is true it helps having these breaks because first I had switched to 4-3-3 and we created a lot opportunities, (Guillermo) Ochoa had one great save in particular.

“After that I moved to plan B and I did that in the cooling break. That is a clever way of benefiting from these breaks.

“There could have been goals before the changes because we had opportunities but then we had this cooling break so at that point I could start with plan B and I could tell everyone what to do.”