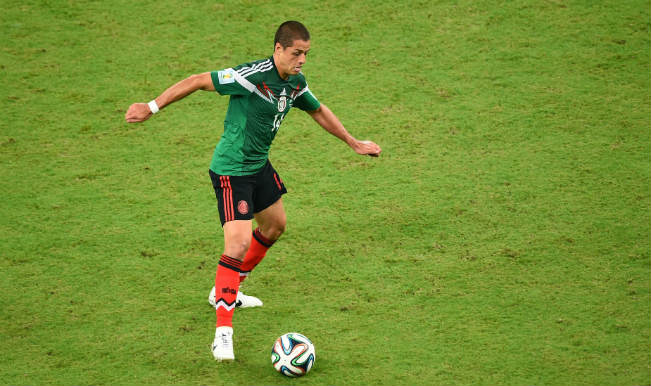 “This whole year has been very tough. Players need confidence more than anything else and I’ve been very short of it. Very few people have shown faith in me over this past year,” said the 26-year-old speaking of his more than a year without a goal for Mexico. Also Read - Rashid Khan: I Will Get Married Once Afghanistan Win The Cricket World Cup

Hernandez, who is known as ‘Chicharito’ (Little Pea), was left in tears after heading his side’s third goal in a 3-1 win over Croatia on Monday which sealed their place in the knockout stages for a sixth straight World Cup. Also Read - Strong Earthquake of Magnitude 7.4 Strikes Southern Mexico, no Damage Reported

The tough year has seen several reports that Hernandez could leave his English club side Manchester United where Dutch coach van Gaal will take over after the World Cup.

Hernandez’s return to scoring form is another boost for a Mexico side that has gone from strength to strength since the appointment of coach Miguel Herrera last year.

The team shrugged off a far from impressive qualifying campaign to progress with ease from Group A, also beating Cameroon in their opening game and holding hosts Brazil 0-0.

“We have to stay very calm, very humble and not get carried away,” said Hernandez.

Victory over the Dutch would match Mexico’s best ever showing at a World Cup when they reached the last eight on home soil in 1970 and 1986.

However, to do so they will have to stop the tournament’s top scorers in the group stage with 10 goals in wins over world champions Spain, Australia and Chile.

Midfielder Wesley Sneijder, though, insists memories of a similar flying start to the 2008 European Championship before a shock defeat to Russia will ensure they do not get carried away.

“The older players have the memory of the Euro 2008,” said the Galatasaray playmaker.

“It is true that at the time we got a bit too excited, perhaps our overconfidence precipitated our loss.

Sneijder said that he Arjen Robben and Robin Van Persie “have been sure this week to warn our young teammates.”

Van Gaal rounded on critics of his side’s counter-attack style after the 2-0 win over Chile, but could be forced to switch from the 5-3-2 formation that he started the tournament with due to injuries.

Bruno Martins Indi has not featured since suffering a concussion in his side’s second match against Australia, whilst Leroy Fer, who opened the scoring against Chile, is ruled out by a hamstring injury.

The absence of Martins Indi meant Dirk Kuyt started in an unfamiliar left wing-back role against Chile and the former Liverpool forward is prepared to do so again to keep his place in the team.

“I was surprised that the coach played me at left-back against Chile, but I believe I did well.

“Defensively I worked hard and got forward when I could to create danger. It’s not a problem for me. I play for the team, not for me.”

The big boost for the Dutch is the return of captain van Persie, who has scored three times in just two appearances. He sat out the win over Chile due to suspension.