Patrice Evra fights his way out of French sin bin

Four years ago Patrice Evra faced deep trouble as a ringleader of striking French footballers. Today he is a moral force again in the dressing room. 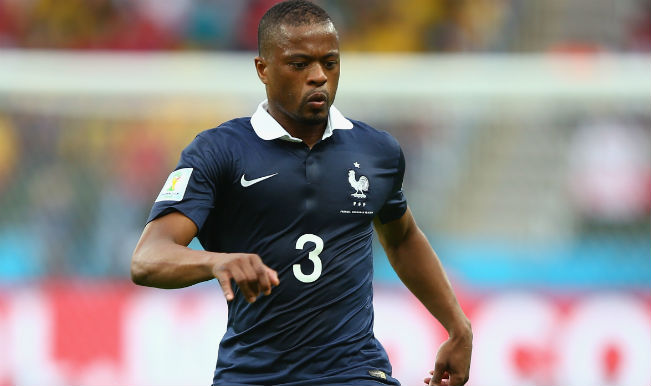 RIBEIRAO PRETO, June 29: Four years ago Patrice Evra faced deep trouble as a ringleader of striking French footballers. Today he is a moral force again in the dressing room and confidently holding off pretenders to his place on the pitch. Also Read - 'Freedom is a Precious Commodity': French Minister Defends Topless Sunbathing After 3 Women Were Asked to Cover Up

As France go into a difficult World Cup second round match with Nigeria on Monday, Evra may no longer be the captain but he will have a key role in coach Didier Deschamps’ defence. Also Read - Emmanuel Macron, Angela Merkel Greet Each Other With 'Namaste', Video Goes Viral | Watch

After a string of sparkling performances, French fans believe their team are winners again. Other countries will be looking to see if Les Bleus can confirm this against the African champions.

Evra, now 33, is lucky to be playing at the World Cup. In 2010, he was the captain who led a team protest after Nicolas Anelka was sent home for an ugly showdown with coach Raymond Domenech. France exited in disgrace and the Manchester United full back was suspended for five internationals.

His outspoken comments have also made headlines in France. He notably lambasted four television commentators, including former World Cup winner Bixente Lizarazu, as a “parasite” last October when they criticized a half-time team-talk he gave.

“If a journalist stings me, I know how to answer,” Evra told a recent World Cup press conference which was dominated by his renewed influential role.

Evra has come back and though current coach Deschamps said the Senegalese-born player could never be his captain the respect between the two is clear to see and which dates back to when he played under him at Monaco and they reached the Champions League final in 2004.

“Nothing’s ever certain with Deschamps,” said Evra, who was switched to left back by Deschamps from his then favoured left wing role when at Monaco.

“That’s why I like to work with him. He never gives you presents.

Evra has in turn earned praise for the way he has shepherded younger players. The team’s elder statesman stepped in to calm midfielder Paul Pogba when he appeared close to a red card against Honduras in their Group E game.

Other players also pay tribute to Evra’s role in the dressing room building the team unity that is so important to France’s style.

“Just because I am not skipper doesn’t mean that I will not fulfil my role on the pitch or in the dressing room,” he said,

And Evra has also been delivering on the pitch as well. Having already seen off the challenge of Gael Clichy for the left-back spot, he is now keeping 21-year-old Paris St Germain defender Lucas Digne on the sidelines.

Evra says he has the “impression of being eight years old” and he ran and tackled during France’s 5-2 win against Switzerland as fast and as determinedly as the youngest in the team.

At Manchester United, Evra now faces competition from 18-year-old England starlet Luke Shaw. But he has signed for one more year with the English giants, indicating he is ready to fight for his place. The defender also scored with a screaming 25 metre shot against Bayern Munich in the Champions League in April.

Evra said that being captain sucked all the air out of him. “Now I still give everything for the others, but I get energy in return,” he said.