Cristiano Ronaldo's Portugal face a sobering early World Cup exit on Thursday even if their world footballer of the year produces pyrotechnics in their final group game against Ghana. 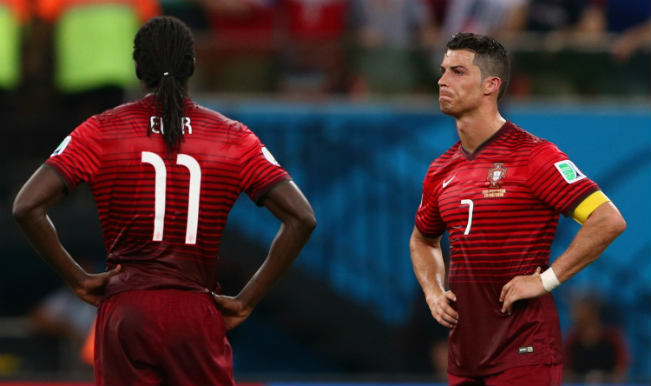 The Real Madrid player came to the World Cup bracketed alongside Argentina’s Lionel Messi and Brazil’s Neymar as one of a triumvirate of true global superstars. Also Read - Cristiano Ronaldo’s ‘£615k engagement ring’ For Georgina Rodriguez is The Most Expensive For a WAG. Here's The List

But while the Barcelona pair have produced moments of sublime skill and goals, the attention surrounding Ronaldo has mainly focused on the health or otherwise of his troublesome left knee.

Portugal — fourth in the FIFA world rankings — are rock bottom of Group G with a solitary point from their matches against Germany and the United States, both of whom have four points.

They were pummelled 4-0 by Germany and the fact they still have any chance of progressing at all is down to Ronaldo, who delivered a sublime cross for their equaliser in a 2-2 draw against the United States.

Despite that goal, headed in by Silvestre Varela in the dying seconds of time added on, the cold, hard reality is that if the United States and Germany draw in Recife, Portugal and Ghana, who also have one point, are doomed.

Portugal have insisted throughout the tournament that their star player is fit but he has failed to dominate matches in the way he does for his club and admitted that his side’s task is “virtually impossible”.

Ronaldo was sanguine after the match against the Americans, admitting that Portugal, despite their lofty ranking, were never among the favourites to lift the World Cup.

“I never thought we would be world champions. We have to be humble and recognise our limitations. There are things we cannot do, like running faster or having more quality,” he said.

“At the moment there are better teams and better players than our own,” added the 29-year-old, who had an outstanding season for Real that culminated in a 10th Champions League title for the club.

Paulo Bento’s side have also had to cope with a one-match suspension for defender Pepe after a red card in the Germany match and an injury to Fabio Coentrao that ruled him out of the rest of the tournament.

Portugal’s task is made all the more difficult by their goal difference of minus four, meaning they must score a hatful of goals even to be in the mix. Ghana’s goal difference is minus one.

And they are unlikely to have it all their own way when they take on Ghana in Brasilia after the Black Stars gave Germany a fright before Miroslav Klose equalised to rescue a 2-2 draw.

Despite that setback Ghana, who reached the quarter-finals in South Africa in 2010, still harbour hopes of progressing to the round of 16.

The exact make-up of the team is difficult to predict after Ghana coach Kwesi Appiah made four changes for the Germany match from the side that lost their opening game to the United States, bringing in Schalke star Kevin-Prince Boateng, although he was taken off early in the second-half.

“We ran ourselves into the ground and played really well against a team of the calibre of Germany,” said defender Harrison Afful.

“We’ve still got a game to go and we’re going to give it our all to go through. If we don’t qualify, it won’t be for lack of effort.”