The FIFA confirmed that there will be a 40 per cent increase in overall distribution of prize money this year as compared to the 2014 World Cup.

The rhapsody of lifting the FIFA World Cup and the honour and prestige associated with it is unfathomable. It defies any other emotion for footballers, who grow up dreaming of winning the World Cup for their nation.Also Read - Prasidh Krishna Can Be a Good Prospect In The Death-Overs, Says Dinesh Karthik

France defeated Croatia 4-2 in the World Cup final at Moscow’s ‘electrifying’ Luzhniki stadium to lift the trophy for the second time in 20 years – they last won the World Cup trophy in 1998 when they had their golden generation of trailblazers in their squad with the likes of legendary players Zinedine Zidane and Thierry Henry leading the team. Also Read - India vs West Indies: Rohit Sharma Identical To MS Dhoni As Leader, Virat Kohli Exit As Captain Won't Effect Indian Cricket, Says Darren Sammy

‘Les Blues’ have received a whopping 38 million USD, which is approximately 255 Crores in Indian rupees. Also Read - Kapil Dev Requests Virat Kohli and Sourav Ganguly to Put Country Before Anything Else, Urges Them to Resolve the Issue

5-time Ballon’Dor (World’s best footballer of the year title)  winner Lionel Messi, who has won it all with his boyhood Club, FC Barcelona, is still longing to get his hands on the 18-carat gold trophy and is willing to trade his accolades at Catalan club to win something big for his nation, Argentina.

“Winning the World Cup is a huge personal challenge for me, for the group [of players Argentina have] and for the country, who have the same dreams as us,” he told El Trece. “It’s a nice responsibility to represent a whole country at a World Cup.

“I know it would be special for what it means, to be [world] champions with Argentina would be different to everything, it would be something unique.”

The emotions associated with the World Cup lasts a lifetime, but it will not be the only thing the participating teams will look to play for this summer. The lucrative prize money which is distributed across all the participating teams’ increases with progression out of each round and fosters an extra boost. There is an additional prize money for teams that qualify from the group stages and then from the next round and so on, and so forth, till the final round (The Grand Finale).

The FIFA confirmed that there will be a 40 per cent increase in overall distribution of prize money this year as compared to the 2014 World Cup.

‘As approved by the FIFA Council at its meeting in Kolkata on 27 October 2017, the total contributions for the participants of the 2018 FIFA World Cup™ will amount to USD 791 million, up 40 per cent compared to the previous edition in 2014. From this total, the biggest share –USD 400 million (as opposed to 358 million in 2014)- will be paid as prize money to be distributed among the 32 participating teams. (FIFA Official Website).

The info-graph table showcases the performance-based prize money distribution at each stage this year (2018) as compared to the 2014 World Cup: 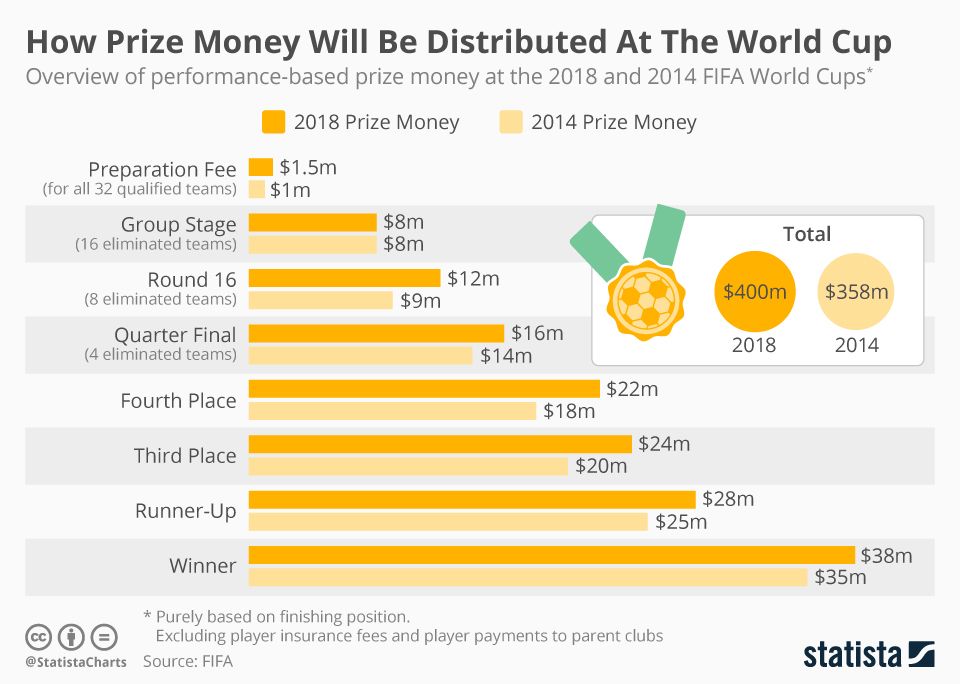 Most footballers representing their countries in the upcoming FIFA World Cup 2018 are under contract from various clubs across the world and will be most likely to miss out on the pre-season matches and training; Particularly players from those nations which would progress to the later stages of the tournament. The rigorous training regime and matches in the World Cup could also result in fatigue of several star players which impacts the club’s performance for the upcoming 2018-19 season. FIFA has thus allotted 209 million USD as a part of the ‘Club Benefit Programme’ to all the clubs releasing players to the participating teams in the 2018 FIFA World Cup.

In addition to this, there has also been another 134 million USD earmarked for the Club Protection Programme (CPP), by which clubs are compensated for losses incurred due to players being injured while on international duty.

These extravagant numbers also highlights the issue of gender disparity in sports, the FIFA Women’s World Cup prize money distribution has been vastly lower; read more on the subject here –

ALSO READ: Gender Disparity: No Women in Forbes Top 100, When Will Equality Prevail?

FIFA boosts prize money for the men again, even as the #USWNT only got $2m for winning in 2015 ($6m less than the worst men’s team gets). https://t.co/8i8nCgZpYG

The debate over which sport engrosses a better prize money should be put to rest after this elaborate comparison.
Performance-based prize money breakdown in Cricket World Cup 2015 compared to upcoming FIFA world Cup: 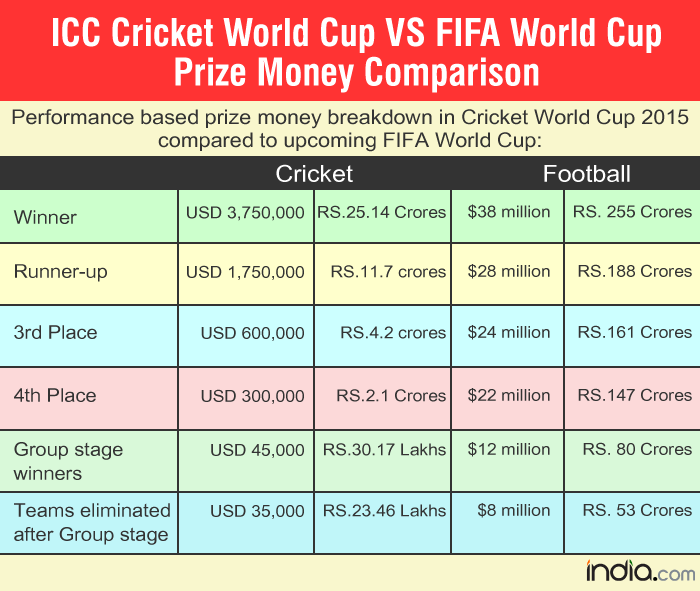 We can ascertain that FIFA distributes approximately 10 times more funds than the ICC, which is a whopping figure!

Engrossing the highest viewership in sports broadcast with over 3.9 billion viewers as opposed to ICC World Cup’s 2.2 billion, it is no surprise that FIFA accumulates such high funds.