A Big ‘Thums Up’ to India’s Beloved Cola: A Brief History and Recipe

Aside from being an obvious and beloved beverage choice, did you know you could cook with Thums Up as well?

Thums Up, a popular drink in India, was created in 1977. When the American company Coca-Cola withdrew from India, two brothers, Ramesh and Prakash Chauhan, joined up with Bhanu Vakil to introduce the soft drink. The Chauhan brothers owned part of the Parle Company and already had two other brands of soda, Limca and Gold Spot, which were popular in India at the time. However, Thums Up quickly became the most popular and had almost a complete monopoly among cola products in India during the 1980s. Also Read - Holi 2021 ZEEL Cook-Off Challenge : 5 Secret Ingredients, No Gas, Watch Video To Know Who Took The Prize

Ramesh had developed the formula from scratch, experimenting with ingredients such as cinnamon, cardamom, and nutmeg. The company also wanted the drink to be fizzy, even when it was not ice-cold, so it could be sold by vendors. After much testing and experimentation, the Chauhan brothers and their research team created a cola that was fizzier and spicier than Coca-Cola. They originally planned to name the drink “Thumbs Up,” but removed the “b” to make the name more unique. Also Read - Learn to Make Banana Chocolate Smoothie, Give Your Tastebuds a Treat with This Drink| Watch

Starting in 1990, Pepsi became a big competitor for Thums Up when it joined the market in India. The two competed for several years, and Thums Up created a larger, 300-milliliter bottle size called MahaCola to improve their popularity. In 1993, Coca-Cola joined the market and the three companies competed intensely. Later in the year, Coca-Cola bought the Parle Company for $60 million. When Parle was sold to Coca-Cola, Thums Up had about 85 percent of the market in India.

In Coca-Cola’s first few years of owning Thums Up, they decreased advertising for the drink in hopes that more customers would buy Coke instead. When they realized they were losing popularity among teenagers and young adults because more people preferred Pepsi to Coke, they began to increase advertising for Thums Up to compete with Pepsi. Thums Up still had about a third of the market share.

As Coca-Cola increased advertising for Thums Up, they focused on targeting middle-aged people more than young adults. They established the soft drink as a stronger and more powerful beverage than Coke or Pepsi. The “Grown Up to Thums Up” campaign portrayed Thums Up as a drink for adults, and Coca-Cola hoped this image would increase sales among young adults. After this campaign, Thums Up gained a large percentage of the market.

The original Thums Up logo was a bright red “thumbs up” gesture with white letters. The logo has been updated since to include some blue lines to the left of the “thums up” image. The company sponsored cricket and was featured at many cricket matches. It also made an appearance in the book and film, “Eat, Pray, Love.”

Today, the beverage is the leading cola in India, with 42 percent of the cola market share and 15 percent of the market share for all carbonated drinks. It is especially popular among teenagers, young adults, and people in their 30s and 40s. The soft drink was even ranked among India’s top trusted brands in the Brand Trust Report 2012, 2013, and 2014.

Aside from being an obvious and beloved beverage choice, did you know you could cook with Thums Up as well? The sweet and subtly spicy notes in the cola lend dimension to the usual soy-garlic-masala blend of many wing recipes. And to wash it down? A Thums Up of course! 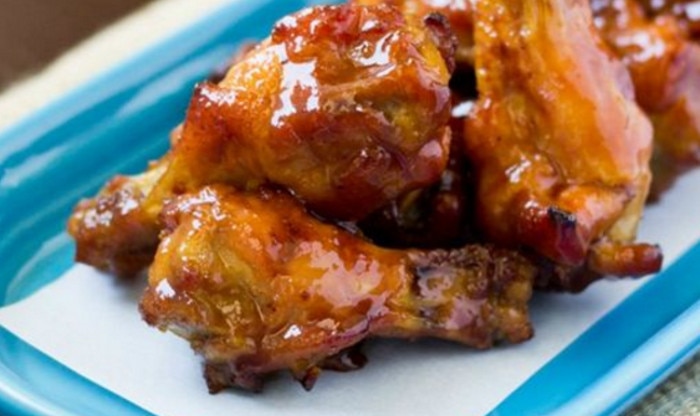 Arrange wings in a single layer on a sheet pan lined with parchment paper. Bake wings until crisp, about 40 to 45 minutes. Rotate baking sheet halfway through cooking time.

To prepare the cola sauce, heat a sauce pan over medium heat. Add Thums Up, brown sugar, soy sauce, and garlic; whisk to combine. Simmer for 10 to 12 minutes, stirring so sauce does not stick or clump.

Add cornstarch and whisk to thicken, about 4 to 5 minutes. Add coriander leaves, salt, and pepper, stir and remove from heat.

At this point, your wings should be cooked; remove from oven and transfer to a large mixing bowl. Pour sauce over wings and toss with tongs. Serve hot.