Beyond The Trend: A Brief History of Turmeric in Ayurvedic Practice

Turmeric is right up there with kale as one of the trendiest foods around right now. But do you know where it comes from?

You’ll find it in curries, you’ll find it in salad dressings—you’ll even find it in teas and lattes. Turmeric is right up there with kale as one of the trendiest foods around right now. Turmeric, though, is nothing new—especially not to the South Asian and Middle Eastern communities. As a spice, turmeric is a staple of Indian cuisine, and it’s used as a dye in both foods and fabrics. Ayurvedic healers have also been using turmeric as a medicinal plant for at least 2,500 years.Also Read - India Creates A Badminton History By Bagging First Ever Thomas Cup Title After Defeating Indonesia, Health Benefits Of Playing Badminton

But what is turmeric? Also Read - Follow These 5 Steps to Good Mental Health

Turmeric is a close relative of the ginger plant. Though native to southern Asia, the plant is now cultivated throughout the world in India, China, Africa, Central America, and the Caribbean. Turmeric has broad, dark green leaves and brilliant pink flowers, but the plant is chiefly prized for its root or rhizome. Initially, the rhizome was used to preserve food.

Archaeologists have discovered traces of turmeric in pots that date back to 2500 BC. Turmeric began to emerge as an important medicine in Ayurvedic healing around 500 B.C. The spice was most commonly used to purify the blood and skin, but it was also used to treat conditions as diverse as epilepsy, diarrhea, and urinary infections. Ayurveda is a traditional healing system that’s still practiced widely throughout India today.  Its name is derived from the Sanskrit words for life (“ayur”) and knowledge (“veda”).

According to Ayurveda, the system has three doshas, or energies, corresponding with human physiological systems. Vata is aligned with the nervous system, pitta with the digestive system, and kapha with the lymphatic system. Only when these three energies coexist harmoniously will a person enjoy good health.

Turmeric plays a reoccurring role within this system. Powdered turmeric was frequently used as an insect repellant. Turmeric pastes were used to alleviate skin conditions like eczema, ringworm, and other parasitic skin conditions. Turmeric juice applied topically was believed to help heal wounds, and turmeric poultices were applied to help relieve the swelling and pain associated with ankle sprains. A popular cold remedy consisted of milk simmered with turmeric and sugar. 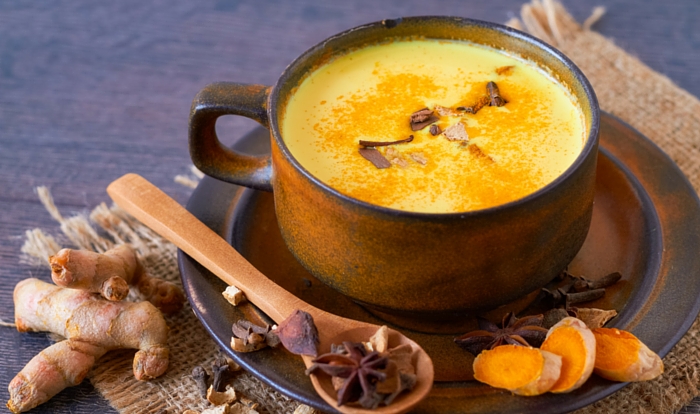 Turmeric was also used in Ayurvedic beauty routines. For centuries, Indian brides owed their glowing complexions on their wedding days to the use of a traditional Ayurveda turmeric facial mask. Many of these routines—both medicinal and topical—are still practiced in India.

In fact, the multi-faceted uses for turmeric are being acknowledged and applied the world over with so many modern day studies with scientific data supporting its power. Modern day scientists have identified a number of chemical compounds in the turmeric rhizome, many of which have powerful anti-oxidant and anti-inflammatory properties. For example, curcumin is a chemical that blocks an enzyme called cyclooxygenase-2, which appears to be implicated in the growth of many types of tumors.

Animal studies have shown that curcumin may successfully block the development of skin cancers and also appears to inhibit the spread of certain types of breast cancer. Research also indicates that curcumin may have some benefit for patients affected by Alzheimer’s disease, cystic fibrosis, and hemorrhagic strokes.

Turmeric proves that many ancient remedies have a lot to contribute to modern medical science.

Turmeric is more than just a food fad. Using it on a regular basis may be able to improve your health and help you look better.