[Risa Feldman’s Her Irish wolfhound mix, Ike, was 12-years-old when he was diagnosed with DM. “[The hardest part is] seeing the slow deterioration of your best friend and his confusion,” she said. | Photo Courtesy: Risa Feldman] Also Read - Dogs Can Be 88 Percent Accurate in Sniffing COVID Cases: Study

Much like ALS, Degenerative Myelopathy is a progressive disease of the spinal cord. According to Dr. Eva Radke, an eight-year veterinarian and co-founder of The Vet Set, DM is reported most often in German Shepherds, and these dogs have unfortunately become the ‘poster child’ for the disease. Also Read - UP Panchayat Poll Candidates Stick Posters on Stray Dogs For Campaigning, Animal Lovers Protest Move

“Another breed at high risk for DM is the Pembroke Welsh Corgi,” she said, “with recent research on the disease focusing on this breed.” However, the gene mutation that causes DM has been identified in a number of other breeds including Bernese Mountain dogs, Boxers, Chesapeake Bay Retrievers, Rhodesian Ridgebacks and Pugs.

Research has shown that DM is caused by a DNA mutation in a particular gene. There is a genetic test available to identify dogs that carry this gene mutation—but much like ALS, there is no known cure.

Degenerative Myelopathy, which usually occurs in older dogs, has an insidious onset typically between eight and 14 years of age. According to Dr. Radke, dogs with early stages of DM will typically show signs of hind limb weakness.

“This may appear as an abnormal gait or difficulty rising at first, but will progress to a more noticeable hunched position in the hind limbs,” she said. “Some dogs have difficulty getting into the car or walking up stairs. I have seen other dogs whose hind limbs will cross over each other when they stand or walk. Affected dogs will often drag their back paws while walking and owners may hear a scuffling noise or notice worn down nails.”

According to Dr. Ayman Hanna, a six-year veterinarian at Animal Empire Veterinary Clinic who has seen anywhere from 40-50 cases of DM, later stages of the disease are characterized by hind leg paralysis, as well as fecal and urinary incontinence. At the end stages, a dog becomes completely paralyzed, and there is a loss of function in the front legs, as well as respiratory dysfunction.

Nothing can be done to minimize the risk of a dog that is genetically predisposed for this disease— however, Dr. Hanna recommends that dogs carrying the gene should not be bred to prevent passing the disease to offspring. A DNA test can be performed on the saliva to detect a mutated gene that is seen in dogs with DM. The test is not 100 percent accurate, however, because some dogs that test negative can develop DM while dogs that test positive will not necessarily develop the disease. 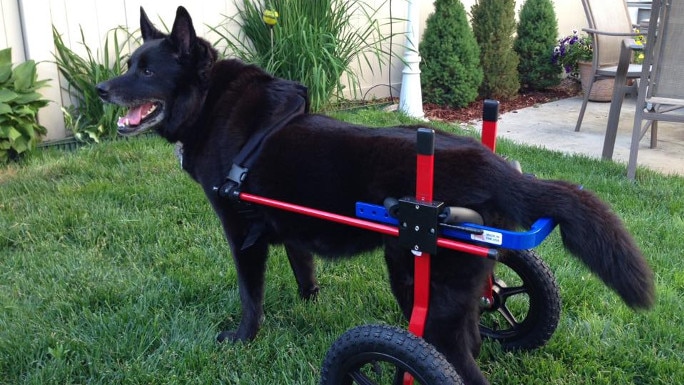 [Nicky, an adopted lab mix, was just shy of her 11th birthday when she lost her battle to Degenerative Myelopathy. “Nicky was not just a patient, but also my neighbor,” said her veterinarian, Dr. Ayman Hanna of Animal Empire Veterinary Clinic in Queens, New York.|Photo Credit: Jolanta Kozikowska]

Any veterinarian will tell you that a DM diagnosis is especially difficult to deliver. Dr. Hanna recalled his most recent DM patient, an 11-year-old lab mix named Nicky.

“Watching our most recent DM case, Nicky, with her condition deteriorate was difficult for me,” Dr. Hanna said. “Nicky was not just a patient, but also my neighbor. After being diagnosed, [Nicky’s family] did everything possible to make her life very comfortable. Unfortunately, Nicky’s condition became much worse and she is no longer with us. She will be truly missed by my staff and me.”

“As a veterinarian my goal is to improve the life and health of my patients as well as helping owners make informed decisions about their pets,” she said. “In a case of Degenerative Myelopathy, it is both frustrating and upsetting to not be able to offer more effective treatments and to deliver the grave prognosis that accompanies this diagnosis. Like most veterinarians, I tend to form close relationships with both my patients and their owners, so witnessing the progression of this disease, as well as counseling and consoling owners along the way, is always very emotional for me.”

Fortunately, dogs with Degenerative Myelopathy do not experience any pain, as they become paralyzed. 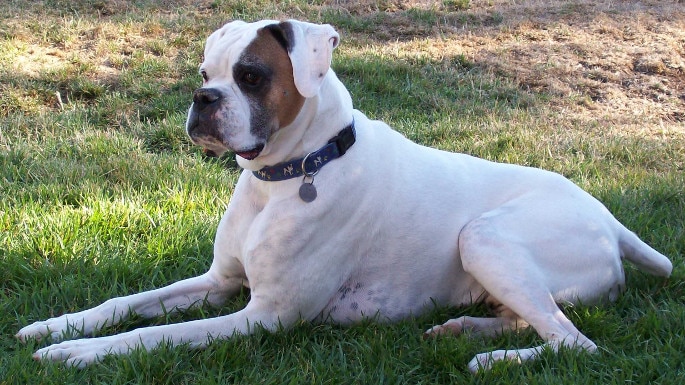 [Gayle Lynn Falkenthal’s boxer, Jasper, was just shy of his eighth birthday when she received the devastating Degenerative Myelopathy news. “He was full of life, loyal and protective as he had always been until his last day,” Falkenthal said of her beloved K-9 companion, who died from the ALS-like disease in October 2009.|Photo Credit: Gayle Lynn Falkenthal]

Caring for Dogs with DM

However, this is little comfort for dog owners who are caring or have cared for, dogs suffering from the disease.  Just ask Gayle Lynn Falkenthal, an independent public relations consultant in San Diego. Falkenthal’s boxer, Jasper, was just shy of his eighth birthday when she received the devastating DM news.

“It is a constant physical challenge when the dog is big,” Falkenthal explained. “Jasper weighed 75 pounds at the start, perhaps 50-55 at the end. For the last year, he could not move without help.“This meant I needed to support his back legs for all meals, all bathroom trips, getting in and out of bed, getting into the car, going to physical therapy, taking him up and down the stairs in my house. I am self-employed, so I was able to do it.”

“I cannot imagine how anyone with a full-time or even part-time job could manage it,” she added. “I only realized in retrospect how sleep deprived I had become. He had to get up to use the restroom at least once a night—it was like having an infant.”

Falkenthal, like many others who have cared for dogs with DM, acquired a wheelchair for Jasper to help him get around.

“Jasper was able to handle it really well, but he was big for a male Boxer, and so the wheelchair accommodating him was also pretty big,” she said. “The problem was that it was so big it was hard to maneuver with him, and nearly impossible for me to get into a car. It was far easier for me to use a ‘Bottoms Up’ leash, a hip sling that supported his back legs. This was our preferred method of getting around 95 percent of the time.”

According to Dr. Radke, while DM can be a devastating disease with no known cure, physical therapy with walking and swimming is the most effective treatment in prolonging a dog’s quality of life with Degenerative Myelopathy. These exercises help to maintain muscle mass and allow dogs to remain ambulatory longer than dogs who do not receive physical therapy.

“I have found acupuncture to be helpful anecdotally in certain dogs, especially when used in combination with physical therapy,” she added. “However, to my knowledge, there are no studies to support this.”

In addition to getting a wheelchair for Jasper, Falkenthal took Jasper to a canine physical therapist for swimming two or three days a week, every week, for nearly two years.

“Jasper had knee surgery as a year-old dog, so he had done rehab with the PT before,” she said. “He loved swimming, loved the pool, and could swim right up to the end. The pool was at a beautiful kennel and daycare facility with agility and obedience yards, it was fantastic and so good for his physical and mental health – and mine.”

Unfortunately, Falkenthal had to put Jasper to sleep in October 2009 – 20 months after his DM diagnosis. But she will always remember her time with Jasper and his unmatched energy.

“When Jasper was physically able, he was an escape artist and he would bolt out my door and race down the street given any chance,” she said.  “He was full of life, loyal and protective as he had always been until his last day.”

Radio host Risa Feldman shares Falkenthal’s pain. Her Irish wolfhound mix, Ike, was 12-years-old when he was diagnosed with DM.

“[The hardest part is] seeing the slow deterioration of your best friend and his confusion,” she said.

“Ike first started losing his balance [and] then he was not able to stand up on his own and it was hard for him to lie down,” Feldman said. “He was a big dog and I tried to make him as comfy as possible. Getting a cart for him so we could continue long walks, in order to maintain the life he was used to. This was the most important to me.”

Unfortunately, Feldman put Ike down three-and-a-half years after he was diagnosed—but much like Falkenthal, she has nothing but the fondest of memories with her beloved furry friend.

“He was my best friend, taught me what unconditional love was and always made me happy,” she said. “Always.”