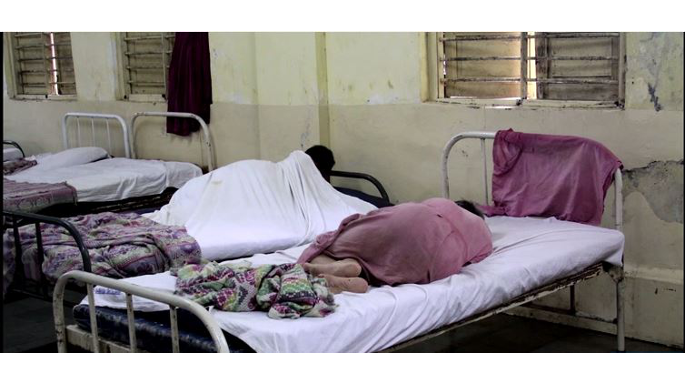 Screenshot from a scene in “Women Institutionalized Against their Will in India,” by the Human Rights Watch group. (Via YouTube.com)

According to a new report entitled “Treated Worse Than Animals” from the New York-based international advocacy group, Human Rights Watch, mental health institutions in India routinely abuse female patients with psychosocial disabilities. Also Read - India-US 2+2 dialogue: What is BECA And How Will it Help India? | Explained

A recent profile of the Thane Mental Hospital in Mumbai, one of four public mental health institutions in all of Maharashtra, highlighted that only six psychiatrists staff a hospital with around 1,500 patients. Some patients sleep on mattresses on the floor, due to a lack of bed frames, and many staff members present dismissive attitudes toward the patients they conversationally label as “mentally retarded.” Most of the women at the hospital are illiterate and come from poor, neglectful families. Rucha Joshi, a psychiatrist at the hospital, said in an interview with the Wall Street Journal, after undergoing such treatment, it is no surprise that “the biggest challenge is getting the patients accepted back into society.” Also Read - International Flights: Who Can Travel Abroad And Where From India | Check Out New Flying Rules

The 106-page report is based on interviews with more than 250 people among visits to 24 institutions across six Indian cities in four states. Resulting from these personal accounts, Human Rights Watch has substantiated that particularly female patients with disabilities are perceived as “incapable, weak [and] lacking the capacity to make any meaningful decisions about their lives.” Some are coercively institutionalized by their families, and go on to face further abuse in their hospital settings, including detention, unsanitary conditions, neglect, involuntary medical treatment and violence. Also Read - International Flights: SpiceJet Announces 8 New Flights Between India, Bangladesh From Nov 5 | Details Here

Superintendent Rajendra Shrisath  said, “When someone is psychotic, he’s not able to give consent.”

So what enables this portrait of mental health in India? Indian women and girls are often abandoned to mental institutions because the national government fails to provide adequate support and services. When families are rendered helpless, they often view these institutions as their best options—not necessarily for care, but for a means to sustain their livelihoods in their home communities.

Like much of India’s healthcare system, mental health is under-funded. According to the World Health Organization’s Mental Health Atlas of 2011, the Indian government spends a mere 0.06 percent of its health budget on mental care. By comparison, Bangladesh surpasses India at 0.44 percent, the United States at 6.2 percent of its GDP, and England at 10.82 percent. According to India’s health ministry, however, 6-7 percent of the national population suffers from psychosocial disabilities. Therefore, when there is a shortage of healthcare professionals, demands for care cannot be met. India has 3,500 psychiatrists, amounting to one for every 343,000 people (WHO). In comparison, the U.S. has one for every 12,837 people.

In a case shared by the Wall Street Journal, a 46-year-old woman in Mumbai was forcibly institutionalized in 2004 at a private hospital for more than a month. She recounts that she was drugged unconscious by healthcare workers pretending to administer a vaccine, and later awoke in a psychiatric ward. She was forced to take medication and treated with electroshock therapy, a process by which electric currents are shot through the brain. Her husband had committed her to the hospital because he wanted a divorce on the pretext that she was mentally ill.

“If I said a single word, he would threaten to put me back there,” she said in an interview with the Journal. In June 2014, a court ruled in the woman’s favor, as the jury found no proof of mental illness and decided against granting her husband a divorce.

As a step towards mitigating similar future cases, the Indian government unveiled its first mental health policy in October 2014. The policy calls for an increase in funds and training for a higher number of mental health professionals, in an effort to provide accessible and affordable care to those with mental illnesses. In context of a country that has long ignored mental health, the policy is progressive and sensitive, hoping to remove stigma and poverty as barriers to care.

It also notes that acts of social exclusion, unequal opportunities and income disparities could aggravate mental illness, particularly for vulnerable groups such as poor, homeless women. The policy further protects the rights of the mentally ill, suggesting that attempted suicide be decriminalized.

Keshav Desiraju, the government’s former health secretary, who was involved in drafting the mental health bill, said “To be female, poor and sick is a deadly combination, and it’s so common.”

While the new bill seems to replace stigma and seclusion with compassion and responsibility, painting the depiction of mental illness as a disease instead of a personal defect, the language is presently effective only in theory.

According to India’s 12th five-year economic plan, the total budget for the National Mental Health Program is almost 5.4 billion rupees ($88.4 million). Vikram Patel, psychiatrist and professor at the London School of Hygiene and Tropical Medicine, said much of this funding, however, is likely to go unspent.

“States vary in terms of their technical capacity to implement the program,” he said.

As with many social policies in India, it is yet to be seen whether the recent mental health bill will be upheld in practice. Implementation may be shaky and depends largely on the parliament’s passing of the bill—a pending decision—along with systematic budgetary support.