The Day 16 of ICC Cricket World Cup 2015 turned out to be another thrilling blockbuster Sunday with two matches taking place. 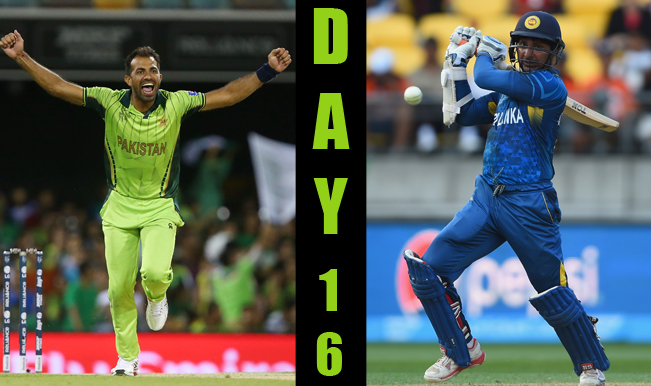 The Day 16 of ICC Cricket World Cup 2015 turned out to be another thrilling blockbuster Sunday with two matches taking place. The first match of Day 16 was Match 22, Group A fixture between Sri Lanka and England with the former side chasing down a huge total of 310 easily by nine wickets at the Westpac Stadium, Wellington. Their third successive victory of ICC World Cup 2015 saw them consolidate their second place in points table. As for the second match played on March 1 saw Asian giants Pakistan register their first victory in the 11th edition of Cricket World Cup, beating Zimbabwe in Group B fixture playing at the Gabba in Brisbane. Catch the Updated POINTS TABLE OF 2015 CRICKET WORLD CUP here. Also Read - PAK vs ZIM Dream11 Team Prediction Zimbabwe Tour of Pakistan 2020: Captain, Vice-captain, Fantasy Playing Tips, Probable XIs For Today's Pakistan vs Zimbabwe 1st ODI at Rawalpindi Cricket Stadium 12.30 PM IST October 30 Friday

Kumar Sangakkara and Lahiru Thirimanne  chased down the total of 310 by nine wickets with 16 balls to spare. Chasing a formidable 310-run target set by England, Sri Lanka looked at ease in the run chase. They were jolted just once when Tillakaratne Dilshan (44) was dismissed with the score at 100. But veteran Kumar Sangakkara (117) and left-handed opener Lahiru Thirimanne (139) put on a match-winning unbeaten partnership of 212 runs to overhaul the target with nine wickets to spare.

An elated Sri Lankan skipper Angelo Mathews praised two of his star batsmen and said he initially believed the 310-run target was out of reach as his side beat England comprehensively by nine wickets at the Westpac Stadium.

Despite a spirited fight by Zimbabwe captain Elton Chigumbura (35), Pakistan managed their first World Cup Pool B win — by 20 runs — at the Gabba here Sunday. After an extremely slow start, Pakistan managed to reach 235/7 thanks to Man-of-the-Match Wahab Riaz’s (54 not out) first One-Day International (ODI) half-century. Zimbabwe looked well on course while chasing. But Pakistan’s pace bowling quartet, especially Riaz (4/45) and Mohammad Irfan (4/30), chipped away wickets at critical junctures to help the 1992 edition champions bowl Zimbabwe out for 215 with two balls to spare.

On March 2, 2015, there are no matches scheduled to be played. The next match will take place on March 3, 2015 is Match 24 between South Africa vs Ireland.