Earlier, England captain Eoin Morgan won the toss and elected to bowl in their cricket World Cup opening match against Australia at the Melbourne Cricket Ground. 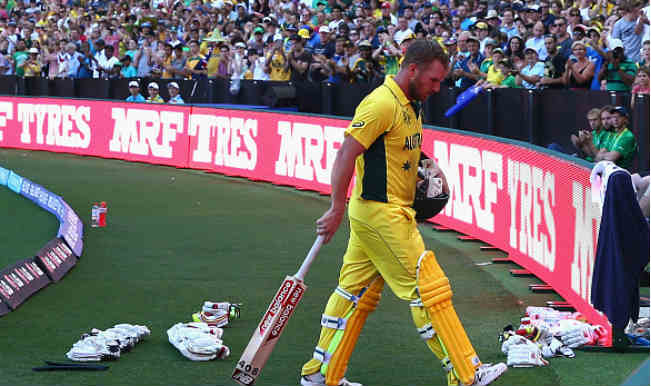 Chris Woakes would be ruing over the dropped catch of Aaron Finch of very first over of Australia vs England ICC Cricket World Cup 2015 match as the fiery opener went on to make a score of 135. Finch looked positive right from the word go playing at Melbourne Cricket Ground as he raced his way to make half-century in 42 deliveries. Along with partner David Warner, Finch gave Australia a solid foundation crossing fifty-run mark with no damage done. But from the other side of crease, he saw three wickets – Warner, Watson and Smith falling in succession. His timely century and solid partnership with captain George Bailey bailed Aussie side. Catch the smashing century by Aaron Finch on the official website of Star Sports. Also Read - IPL 2021 Auction Full List: All Players Who Went Unsold

Earlier, England captain Eoin Morgan won the toss and elected to bowl in their cricket World Cup opening match against Australia at the Melbourne Cricket Ground. The city was drenched by overnight storms but the morning rain cleared and opened the way to sunny skies. The previous night rains and overcast conditions made the 28-year-old English captain opt for bowling first in the match.  You can watch the free live streaming of the cricket match here.
Also Read - IPL 2021: Australian Players Will be Given NOCs on Case-by-Case Basis

Australia will be keen to win a fifth World title having won the first time in the Indian sub-continent in 1987 followed by a hat-trick in 1999 (England), 2003 (South Africa) and 2007 (West Indies). The team has talented players in all department, and the only worry will be skipper Michael Clarke’s hamstring injury, which ruled him out of the tournament opener.  Also Catch the Live Cricket Scorecard and Ball by Ball Commentary of the Australia vs England match here.