Despite getting an early start and a life, the aggressive all-rounder could not capitalize. 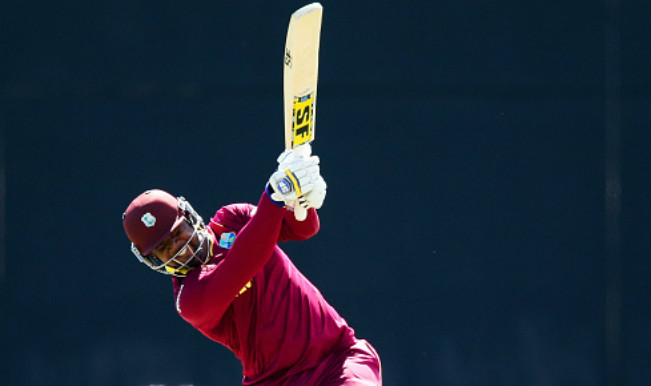 West Indies batting woes continued as they lost both their openers Chris Gayle and Dwayne Smith inside the first ten overs of the Match 10 of ICC Cricket World Cup 2015 against Pakistan. In matter of quick overs, Dwayne Smith followed his partner to pavilion as he was done in by beautiful outswinger by Sohail Khan. One can watch the full video highlights of Dwayne Smith dismissal on the official website of Star Sports here. Also Read - Liam Plunkett, Tim Southee Among 93 International Cricketers Listed For Lanka Premier League

With Dwayne Smith’s dismissal, Nasir Jamshed would be a relieved man as he had dropped a simple catch earlier in fifth over to give Dwayne Smith a lifeline. But despite getting an early start and a life, the aggressive all-rounder could not capitalize. He was tempted into hitting the outswinging delivery by Sohail Khan and a sharp waist height catch by Haris Sohail at the second slip. Smith departed in eighth over with these figures Dwayne Smith c Haris Sohail b Sohail Khan 23 (27b) SR: 85.18. Also Catch: How to watch the Live Telecast and Streaming of Pakistan & Bangladesh Cricket World Cup 2015 matches. Also Read - It Hurt Too Much: AB de Villiers Recalls Losing to NZ in 2015 WC

Earlier, the dangerous batsman in any format of the game, Chris Gayle’s search for good form continues after he was dismissed cheaply in second ICC Cricket World Cup 2015 match against Pakistan. On the damp wicket of Hagley Oval, Gayle was done in by towering Mohammad Irfan’s delivery, which Gayle to pull but was way too quick for him to take control of and instead resulted in the top edge that was well taken by Wahab Riaz at the long leg. You can catch LIVE UPDATES of the PAK vs WI match here.