ICC Cricket World Cup 2015 Countdown Day 21: Battle within a battle; Aamir Sohail vs Venkatesh Prasad during the India vs Pakistan in 1996 World Cup

On the penultimate ball of 15th over, Aamir Sohail smashed Venkatesh Prasad through the extra cover boundary 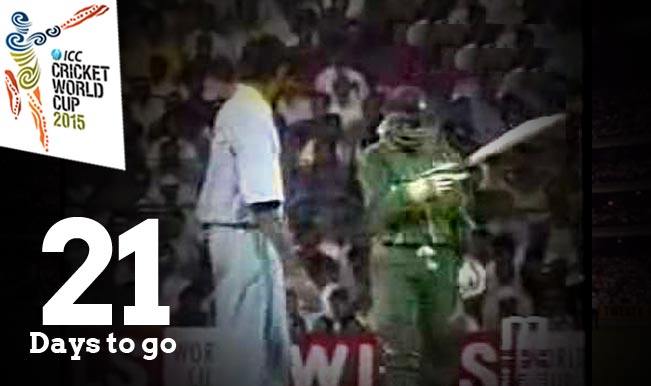 There is never a dull moment when India takes on Pakistan and the quarterfinal clash of the 1996 World Cup at M. Chinnaswamy Stadium between the two rivals was no different. With 21 days to go for the ICC Cricket World Cup 2015, we go back to the past and bring to you one of the classical encounters between bat and ball on-field. Also Read: ICC Cricket World Cup 2015 Schedule in IST: Time Table, Fixture & Venue Details of all WC 2015 Matches Also Read - Coronavirus: India Crosses 2 Million-mark; Maharashtra, Karnataka Witness Highest Single-day Spike

Chasing a target of 288, in front of jam-packed M. Chinnaswamy crowd, Pakistan were off to a blazing start with stand-in captain Aamer Sohail (regular captain Wasim Akram had opted out of the match) and Saeed Anwar ripping apart Indian attack. The crowd, backing the home team, were stunned by Pakistan’s reply. However, they had their moment when Javagal Srinath removed Anwar, but Aamer Sohail’s bat again made them silent. Also Read - 'Abrogation of Article 370 India's Internal Matter, Other Nations Have no Business,' Says Venkaiah Naidu

The left-hander, Sohail continued his stroke-making and looked all set to take game away from India with a run-rate of over 7 runs per over.  On the penultimate ball of 15th over, Sohail smashed Venkatesh Prasad through the extra cover boundary and then charged his bat at the bowler, aggressively. Prasad, who was already under the pump, chose not to react. But next ball he had Sohail clean bowled and the crowd at M. Chinnaswamy Stadium erupted in joy. Eventually, Pakistan batting collapsed after the dismissal of Sohail and India went on to win the match by 39 runs. Also Read:  ICC Cricket World Cup 2015 Schedule: Complete Fixtures & Time Table of all Cricket World Cup 2015 Matches