The atmosphere was electrified, as 87,000 odd people had turned to watch Pakistan-England Final at Melbourne Cricket Ground 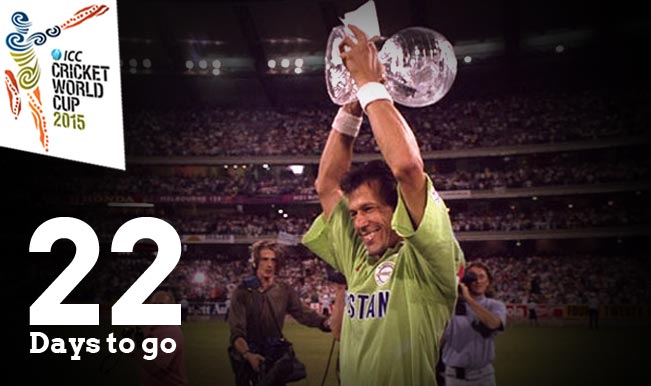 It is 22 days to go for ICC Cricket World Cup 2015 and as part of our countdown series, we bring to you Pakistan’s title triumph in 1992 World Cup. Pakistan at one stage of the tournament faced possible elimination after winning just one of their first five matches. But led by their inspirational captain Imran Khan, who ordered his team to fight like “Cornered Tigers” and the fortune of the side changed. They won last five matches on a trot, including the Final against England, to lift the coveted trophy. Also Read: ICC Cricket World Cup 2015 Schedule in IST: Time Table, Fixture & Venue Details of all WC 2015 Matches Also Read - Misbah-ul-Haq Steps Down as Chief Selector of Pakistan Cricket Team

The atmosphere was electrifying, as 87,000 odd people had turned to watch Pakistan-England Final at Melbourne Cricket Ground (MCG). Pakistan winning the toss opted to bat, but Derek Pringle’s opening spell left the “green shirts” stuttering at 24 for 2. Out came veterans, Imran Khan and Javed Miandad to bat and they revived things for Pakistan with their 139-run third wicket partnership. Towards the end, it was the bat of youngsters Inzamam-ul-Haq and Wasim Akram that yielded combined 75 runs off 53 balls to take Pakistan to a decent total of 249 in 50 overs. Also Read - Imran Khan UNGA 2020 Speech Almost Replica of 2019 litany

Chasing 250, England were undone by the pace of Wasim Akram and Aaqib javed early on and then Mushtaq Ahmed’s spin left the Poms baffled. England kept losing wickets at regular interval and fittingly it ended with Imran Khan scalping last wicket in last over, to give Pakistan its only World Cup. Also Read:  ICC Cricket World Cup 2015 Schedule: Complete Fixtures & Time Table of all Cricket World Cup 2015 Matches