All hopes of Pakistan’s fight back were pinned on Inzamam-Imran partnership, but what followed, completely took Pakistan out of the game 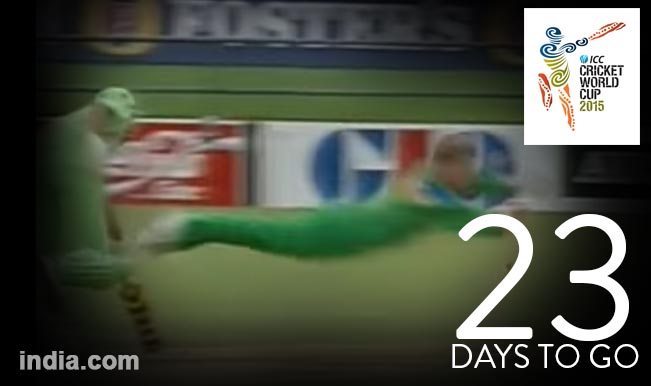 Chasing a revised target of 194 in 36 overs, Pakistan were two down for 134 with Inzamam-ul-Haq and Imran Khan on crease sharing a healthy 85-run partnership. Pakistan needed 60 runs in less than five overs and all hopes of Pakistan’s fight back were pinned on this partnership. But what followed, completely took Pakistan out of the game. Also Read: ICC Cricket World Cup 2015 Schedule in IST: Time Table, Fixture & Venue Details of all WC 2015 Matches Also Read - My Career Has Never Been Stable, Always Up And Down: Umesh Yadav

Inzamam looking for leg-bye off Brian McMillan, took off for a run, but Imran at non-strikers end turned down the single. Trying to get back into the crease, Inzamam was run-out, but it was no ordinary stuff! Jonty, who was fielding close to backward point, rushed at the ball and then charged towards the stumps. Jonty, who decided against throwing the ball, threw himself at the stumps with ball in his hand, which uprooted the stumps. As a result of this run-out, with required run-rate creeping up, Pakistan could not complete the target and lost the match by 20 runs. Also Read:  ICC Cricket World Cup 2015 Schedule: Complete Fixtures & Time Table of all Cricket World Cup 2015 Matches

Watch the acrobatic Jonty Rhodes stuff, it surely will give you goosebumps: