In the end, Kiran More and India finally got the man when Srinath bowled Miandad and India winning the match by 43 runs. 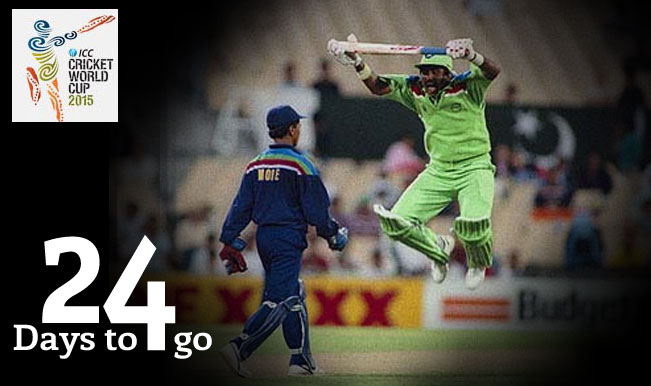 The famous photograph of Pakistani cricketer Javed Miandad leaping up in air in front of Indian player Kiran More reminds one of the cult rivalry these two nations have shared over the years. During the 1992 World Cup, Imran Khan-led Pakistan were playing against India on March 4, 1992, at the Sydney Cricket Ground when one of the most memorable incidents of cricketing history took place. Also Read - India vs Pakistan Rivalry to Resume in 2021? PCB Asked to be Prepared For Bilateral Series

The match saw a young Sachin Tendulkar top-scoring with 54 runs while playing in his first World Cup, and helped India set a target of 217 for the opponents. In reply to India’s total of 216 for 7 wickets, Pakistan was found struggling with its wickets tumbling quickly. Adding to the woes and irritation of Pakistan were the constant loud appeals of Indian wicket-keeper Kiran More, who had a history of provoking batsmen from behind the stumps. Also Read: ICC Cricket World Cup 2015 Schedule in IST: Time Table, Fixture & Venue Details of all WC 2015 Matches Also Read - Not Possible to Hold Asia Cup This Year; Hopes India Visit Pakistan For 2023 Edition: PCB Chairman

Javed Miandad, Pakistan’s leading batsman with a spitfire personality seemed slightly baffled by More’s constant appealing. It irritated Miandad so much that he turned towards More in the middle of the over and did three perfect monkey jumps! Also Read:  ICC Cricket World Cup 2015 Schedule: Complete Fixtures & Time Table of all Cricket World Cup 2015 Matches

This led to a series of verbal altercations between the two players, but umpires David Shepherd and Peter McConnell did not find anything objectionable in Miandad’s monkey act. In the end, Kiran More and India finally got the man when Srinath bowled Miandad and India won the match by 43 runs. Meanwhile, Pakistan’s skipper Imran Khan called Miandad’s antics as “A bit of clowning”! Catch the must-watch video below.