Controversy broke out after the penultimate ball of the 41st over of England’s innings in the 2nd World Cup match on Saturday, as James Anderson was wrongly adjudged run-out by the third umpire, leaving James Taylor stranded at 98 not out 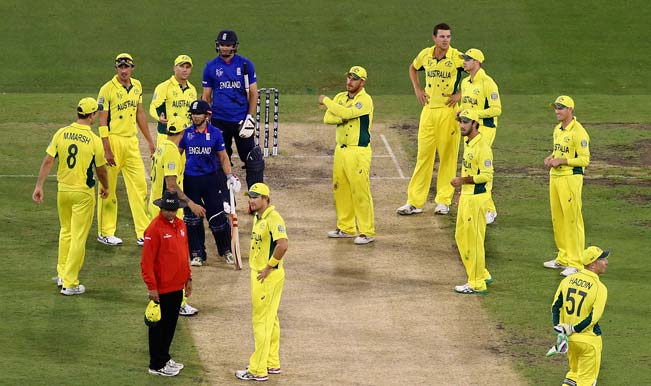 Melbourne: Controversy broke out after the penultimate ball of the 41st over of England’s innings in the 2nd World Cup match on Saturday, as James Anderson was wrongly adjudged run-out by the third umpire, leaving James Taylor stranded at 98 not out. England lost the game by a mammoth 111 runs, trying to chase down a total of 342 posted by Australia at the Melbourne Cricket Ground (MCG). Also Read - ENG vs IND: Jos Buttler, Jack Leach Return to England Squad For 5th Test vs India in Manchester

Facing Josh Hazlewood, Taylor was struck on the pad and set off for a leg bye as the ball trickled towards Glenn Maxwell at gully. Hazlewood and Australia’s close fielders launched an appeal for leg before wicket (lbw) and umpire Aleem Dar raised his finger. Maxwell fired a throw at the stumps at the striker’s end, hitting the target. Taylor reviewed the lbw decision and replays showed the ball to be sliding down the leg side. ICC Cricket World Cup 2015 Schedule: Complete Fixtures & Time Table of all Cricket World Cup 2015 Matches. Also Read - James Anderson's Chat with Nasser Hussain Reveals Why England Struggled To Get Indian Wickets

Square-leg umpire Kumar Dharmasena then asked the third umpire Billy Bowden to review the run-out chance. Anderson was found to be short of his ground and was given out to end the match. Taylor protested, and rightfully so, given the Playing Conditions for the Cricket World Cup dictates the ball should have been deemed dead when umpire Dar raised his finger. No further runs or dismissals were possible. Anderson should have been given not out and Taylor would have again been on strike on 98 not out. The ICC released a brief statement after the match confirming Anderson had been incorrectly given out.

“The PCT (Playing Control Team) spoke to the England team management and acknowledges that the game ended incorrectly and an error was made,” the statement read. ICC Cricket World Cup 2015 Schedule in IST: Time Table, Fixture & Venue Details of all WC 2015 Matches.