Sri Lanka great Muttiah Muralitharan has pleaded for key spinner Rangana Herath to be kept on ice for the World Cup quarter-finals after suffering a nasty injury to his finger. 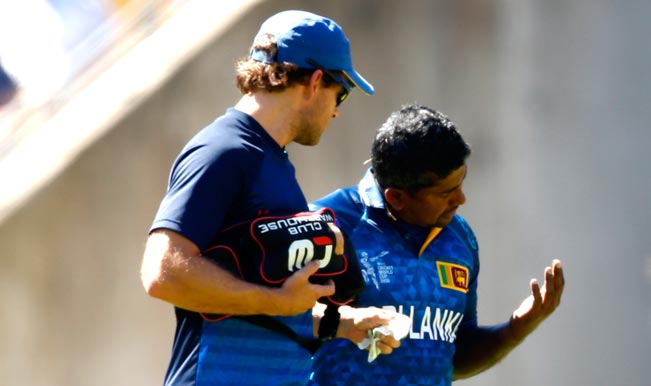 Sri Lanka won the match by nine wickets and with the 1996 champions almost assured of a quarter-final spot, record wicket-taker Muralitharan believes Herath can safely be rested for the remaining pool games against Australia in Sydney next Sunday and with Scotland in Hobart three days later. ICC Cricket World Cup 2015 – Full Points Table Also Read - Vision of US For Sri Lanka Very Different From ‘Predator’ China, Says Pompeo

“He has been Sri Lanka’s steadiest and most reliable bowler so far in the tournament,” wrote Muralitharan in his International Cricket Council (ICC) column. Should Herath be ruled out, as is likely, the main spinning duties will pass to Sachithra Senanayake who was included in the squad after his bowling action was cleared by the ICC.

“I would not try to rush Herath back, either for the match with Australia or for the clash with Scotland. An injury like the one he has picked up to his spinning finger needs time to heal so I would allow him the maximum time to recover,” added Muralitharan. ICC Cricket World Cup 2015 Schedule in IST: Time Table, Fixture & Venue Details of all WC 2015 Matches.