The opening match of the defending champions India is a dream clash with arch rivals Pakistan on a Sunday, February 15th blockbuster. 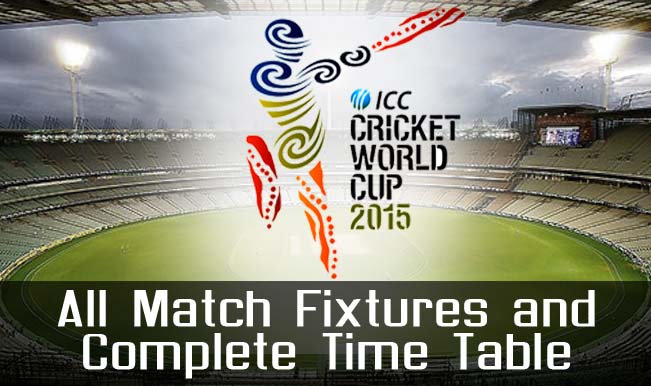 ICC Cricket World Cup 2015 officially began with the two-act opening ceremonies taking place in Christchurch and Melbourne on February 12. And the action on field will begin with the double header – New Zealand vs Sri Lanka and Australia vs England taking place on February 14, Saturday.  The 11th edition of Cricket World Cup also marks the tournament coming Down Under after a gap of 23 years. The 49-match schedule and fixtures will be played over the span of one and half months with 14 nations participating. Former Indian great Sachin Tendulkar has been roped in as the ambassador of the tournament for the second time in row. Also Read: Leading Run-Scorers of 2015 Cricket World Cup. Also Read - Played 2015 ODI World Cup With a Broken Knee: Mohammed Shami

The ICC World Cup 2015 that is co-hosted by Australia and New Zealand will see a total matches of 49 played with total number of 14 nations participating. This edition of 2015 World Cup is said to be one of the biggest tournament taking place in the sporting world. The 49 matches will be played in 14 venues with Australia staging 26 games at grounds in Adelaide, Brisbane, Canberra, Hobart, Melbourne, Perth and Sydney while New Zealand hosting 23 games in seven cities, including Auckland, Christchurch, Dunedin, Hamilton, Napier, Nelson and Wellington. Also Catch the Updated Point Table of 2015 Cricket World Cup.

The final match of the tournament will take place at the Melbourne Cricket Ground for which they have relaid the stadium turf and developing a new by the finals. The 11th ICC Cricket World Cup featuring 49 matches is scheduled to take place from February 14 February to March 29 2015.   [Also Read: ICC Cricket World Cup 2015 Schedule in IST: Match Fixtures, Time Table & Venue Details of WC 2015]

The 14 nations have been divided into two groups – Pool A and Pool B. In the Pool A, the teams are England, Australia, Sri Lanka, Bangladesh, New Zealand, Afghanistan and Scotland while Pool B features South Africa, India, Pakistan, West Indies, Zimbabwe, Ireland and United States of Emirates. The group matches are to be scheduled to be played till March 15.

*All dates are shown local to the host city

India became the first host nation to win the ICC World Cup in 2011, something Australia and New Zealand would be eyeing this edition. The format is the same as the 2011 edition: 14 teams will take part in the initial stages, divided into two groups of seven; the seven teams play each other once before the top four teams from each group qualify for the quarter-finals. The format ensures that each team gets to play a minimum of six matches even if they exit in the group stage. All teams participating in the tournament will play two matches apiece as practice games but these will be termed as non-ODI games. You can download the above ICC Cricket World Cup 2015 Schedule and Time-Table and Save As JPEG or in PDF format.