The defending champions India is scheduled to begin their campaign against Pakistan on February 15 in a day-night clash at Adelaide Oval, Adelaide. 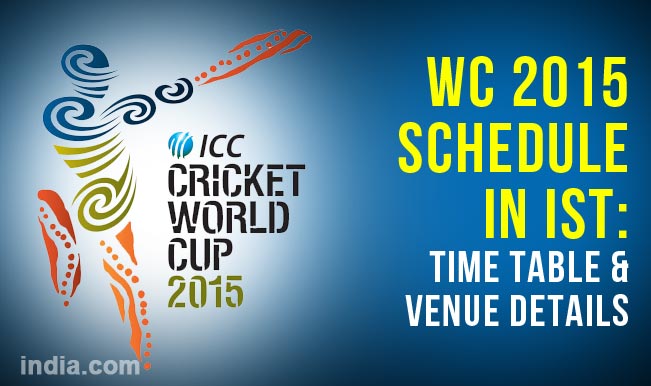 The 2015 ICC Cricket World Cup, will feature its first match, between New Zealand and Sri Lanka at Hagley Oval in Christchurch for Indian viewers on February 15 at 3.30 am IST early morning. The match timings for the matches will follow three timings in India – the morning matches scheduled in Australia and New Zealand at 3.30 am, 6.30 am and the Day-night matches will take place at 9.00 am IST. The defending champions India is scheduled to begin their campaign against Pakistan on February 15 in a day-night clash at Adelaide Oval, Adelaide. Also Read: Leading Wicket-Takers of 2015 Cricket World Cup.

The exciting clash for the 11th ICC Cricket World Cup title, the all-important final will be played on March 29 at the Melbourne Cricket Ground.

All the participating teams will announce their final 15-man squad before January 10, 2015. The 11th Edition of ICC World Cup 2015 follows the same format as that of the previous edition. India became the first host nation to win the ICC World Cup in 2011, something Australia and New Zealand would be eyeing this edition. All teams participating in the tournament will play two matches apiece as practice games but these will be termed as non-ODI games. You can download the above ICC Cricket World Cup 2015 Schedule and Time-Table and Save As JPEG or in PDF format.