At the Sydney Cricket Ground, it is swarming army of MS Dhoni's Team India taking on the golden rush of Michael Clarke's Australian supporters. 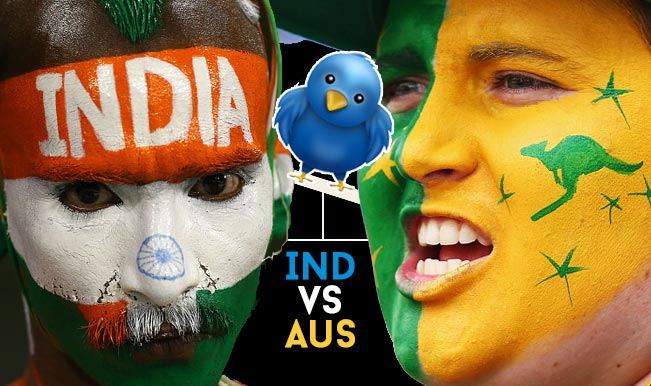 At the Sydney Cricket Ground, it is swarming army of MS Dhoni’s Team India taking on the golden rush of Michael Clarke’s Australian supporters. In the second semi-finals of 2015 Cricket World Cup, while the Indian Cricket Team is battling a daunting task in form of Clarke’s Kangaroos, Men in Blue’s avid supporters are ensuring complete support on social media especially the Twitterati are having a busy day cheering their side. Bouyed by Steven Smith’s fine century (105 runs off 93 balls), Australia posted 328/7 after choosing to bat against India in the second cricket World Cup semi-final here on Thursday. Smith alongwith opener Aaron Finch (81 off 116) contributed to the bulk of the home team’s total with a 182-run second-wicket partnership at the Sydney Cricket Ground. Catch- Live commentary of India vs Australia with with gifs, tweets and pictures here.

Wicketkeeper Brad Haddin (not out seven) and pacer Mitchell Johnson (unbeaten 27) produced some lusty blows towards the ned to guide Australia to the strong total. Pacer Umesh Yadav was the most impressive Indian bowler, distinguishing himself with 4-72 off his nine overs bowled.

One of international cricket’s fiercest rivalries will resume after six weeks when Mahendra Singh Dhoni’s men will get down to business against Michael Clarke’s team which will be supremely competitive with some high-quality performers in their ranks. While the Ashes rivalry has history attached with it and India-Pakistan contests their own political flavour, the India versus Australia rivalry has been equally intriguing in recent years where an inch won’t be given without a bullish fight.

On basis of current form, India with seven straight wins have been the team of the tournament so far but when it comes to playing Australia, they have not won a single match in seven encounters across two formats which also includes a warm-up game of the mega event played some 43 days ago. These matches include four Tests, out of which two were won by the hosts, two ODIs of the tri-series and warm-up match (unofficial) before the start of the tournament proper. Inputs from agencies.