This was India's ninth straight victory at the mega event, starting from their win against the West Indies in Chennai during the 2011 edition. 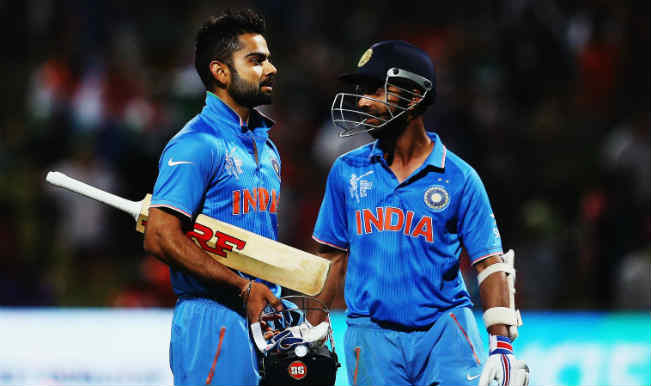 Defending Champions India registered their fifth consecutive win in ICC Cricket World Cup 2015 by defeating Ireland by eight wickets at Seddon Park, Hamilton. Target of 260 proved to an easy one for Men in Blue as openers Rohit Sharma and Shikhar Dhawan laid the solid foundation with a mammoth 174-run stand. The left-hander slammed hundred off just 84 balls, his career’s eighth ton, while Rohit scored 64. After both the openers were dismissed, it then remained just a formality for Virat Kohli and Ajinkya Rahane to complete the chase. One can catch the full video highlights of Match 34 of ICC Cricket World Cup 2015, India vs Ireland on the official website of Star Sports. Also Read - Rahul Dravid Officially Applies For Team India Head Coach's Post; VVS Laxman Likely to Take Over at NCA

Earlier, Irish captain William Porterfield after winning the toss opted to bat first. The decision looked justified as Porterfield along with Paul Stirling got off to a blazing start and prompted MS Dhoni to go for bowling changes. With Ravi Ashwin providing the vital breakthrough by removing Stirling, Dhoni introduced Suresh Raina from other end and it paid off as he removed Ed Joyce. Watch- Full Video Highlights of Shikhar Dhawan’s hundred. Also Read - IND vs PAK: Virat Kohli Reacts After Loss vs Pakistan in T20 World Cup 2021, Says Not Going to Press Panic Button

Porterfield then along with Niall O’Brien stitched 53 runs partnership for the third wicket to bring stability to Ireland innings. Mohit Sharma then removed Porterfield to provide India with a breakthrough. O’Brien then formed crucial 61-run stand for the fourth wicket with Andrew Balbirnie, but flurry of wickets towards the end saw Ireland being bowled out for 259 in 49 0vers.