India has already qualified for the quarter finals and South Africa also likely to join them, it will be an open fight between Ireland, Pakistan and the West Indies for the last two berths left in the pool. 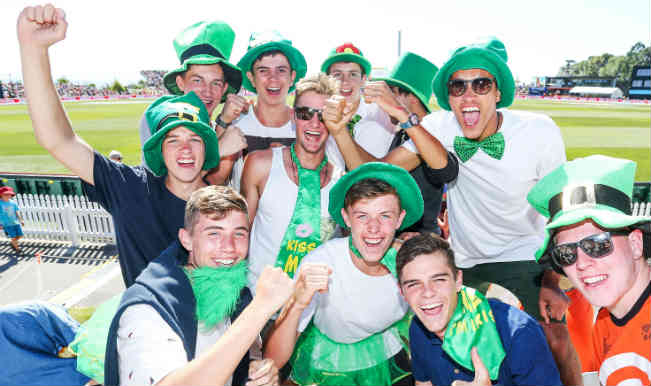 One of the most charismatic teams of 2015 Cricket World Cup, Ireland will be face a daunting task in form of defending champions India at Seddon Park in Hamilton in their bid to become only associate nation to progress to the quarterfinal stage. In the match 34 of ICC Cricket World Cup 2015, India vs Ireland Group B fixture encounter is one of the awaited clashes of the group, especially with Ireland performing so well. Apart from channels like Star Sports, Nine Network doing non-stop coverage, residents in Bangladesh can catch their side battle it out against Afghanistan live on national private satellite channel Gazi TV. One can catch the live streaming of IND vs IRE, Match 34 of 2015 Cricket World Cup starting at 6.30 am IST on Sky Sports here. For UK viewers, Live coverage of the tournament will be broadcast only on Sky Sports. MUST CATCH Live Score Updates India vs Ireland, ICC Cricket World Cup 2015 Match 34. Also Read - Rahul Dravid Officially Applies For Team India Head Coach's Post; VVS Laxman Likely to Take Over at NCA

Ireland have a strong chance making it to quarter finals of ICC World Cup 2015 after having beaten the West Indies, Zimbabwe and the United Arab Emirates (UAE) side in Group B matches to cling to fourth place in points table. With the Irish side playing India on March 10 and Pakistan on March 15, Ireland captain William Porterfield is of the view that his side is ready for the tough challenges ahead. The skipper also hoped his team’s good performance will force the International Council Cricket (ICC) to reverse its decision of making the future World Cups a 10-nation affair. Also Read - IND vs PAK: Virat Kohli Reacts After Loss vs Pakistan in T20 World Cup 2021, Says Not Going to Press Panic Button

Meanwhile, India has already qualified for the quarter finals and South Africa also likely to join them, it will be an open fight between Ireland, Pakistan and the West Indies for the last two berths left in the pool. India-Ireland tie will also mark India’s first match on New Zealand soil who have completed their Australia leg of the group phase. India’s last group match against Zimbabwe will also take place in Auckland’s Eden Park.