Take a look at some India vs Pakistan quotes with motivating SMS, WhatsApp and Facebook messages to wish Team India's win at 2015 Cricket World Cup: 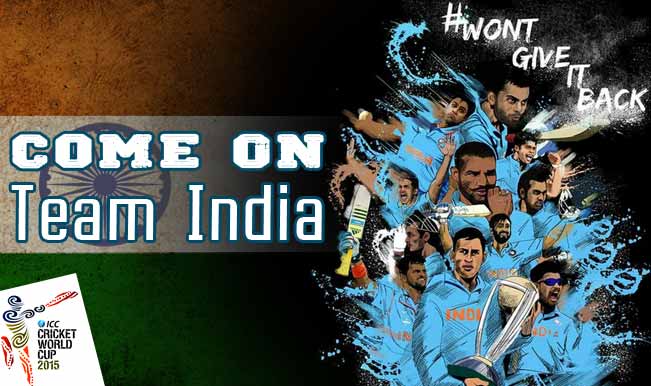 Dhoni, Dhoni…Come on Team India! If this is the only phrase that is playing in loop in your mind, then rest assured my friend that cricket fever has caught on with you! And the passion increases to an altogether different level with the defending champions, our own Men in Blue – Team India, beginning their ICC Cricket World Cup 2015 campaign against none other than arch-rivals Pakistan on February 15 at Adelaide Oval. Also Read: 2015 Cricket World Cup Google doodle portrays India vs Pakistan high-octane clash! Also Read - Sunil Gavaskar Names 2 Players Who Can do All-Rounder's Job & Replace Hardik Pandya in Team India

Ahead of the big match, many cricket enthusiasts have been talking about the form of the Indian cricket team. From murmurs regarding India’s bleak chances going in the tournament and how Pakistan can finally manage to register their sole victory over Team India (they are yet to beat India on the five occasions played so far in World Cup editions of 1992, 1996, 1999, 2003 and 2011) on Sunday. But how can that side lose which has the most dedicated and crazy fans who have already started praying and sending wishes for captain MS Dhoni and the boys to come up as winners once again? Also: Pakistan’s response to Ind vs Pak promotional ad of CWC 2015 is disgusting! Watch Video Also Read - ENG vs IND 2021: Virat Kohli And Co. Has Centre Wicket Training Session | See Pics

While India-Pakistan remains to be a high pressure match on each and every occasion, Indian fans believe in ensuring their team does not shoulder the pressure alone. To keep the morale up and high, Indian fans can share these motivating messages and quotes via SMS, or on WhatsApp and Facebook with each other. The world needs to know about the Indiawaale who are all set to Bleed Blue in the India vs Pakistan match! Also: India vs Pakistan promotional ad of ICC Cricket World Cup 2015: Will Pakistan ever get mauka? Watch video

Take a look at some India vs Pakistan quotes with motivating SMS, WhatsApp and Facebook messages to wish Team India’s win at 2015 Cricket World Cup: 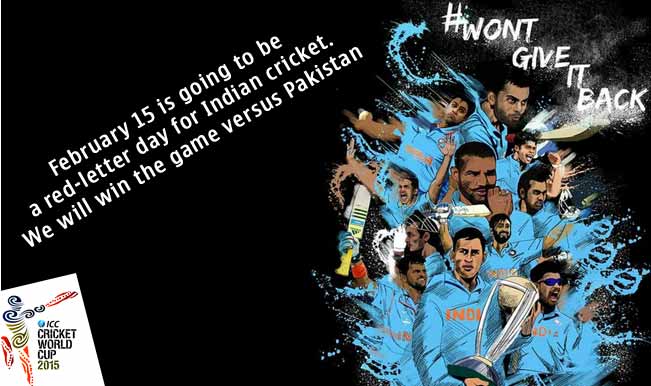 Message Reads: February 15 is going to be a red-letter day for Indian cricket.We will win the game versus Pakistan.

Also touted as D-Day for the India-Pakistan fans. Pakistan have a better One-Day International (ODI) record against India, they have never been able to defeat their traditional rivals in all five Cup contests till date, the last of which came four years ago in the semi-final at Mohali. 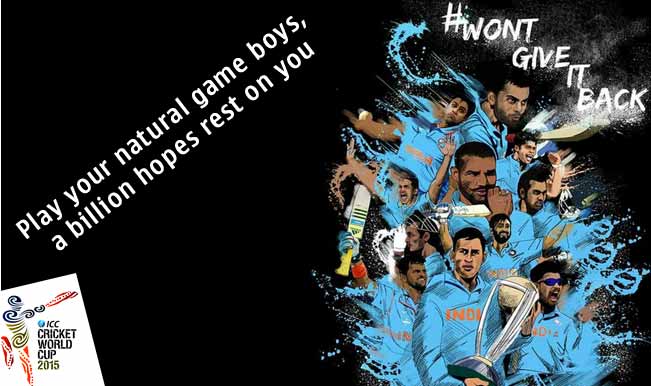 Message Reads: Play your natural game boys, a billion hopes rest on you.

Though the defending champions are not in prime form and did not fare well in their tour Down Under, but cricket pundits believe that come-what-may, in today’s date, India are a top ODI side. 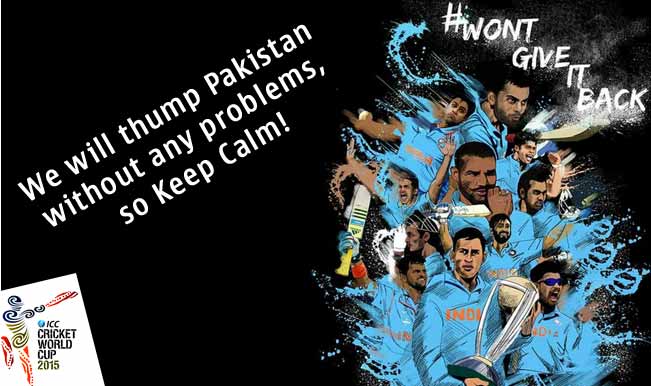 Message Reads: We will thump Pakistan without any problems, so Keep Calm!

The 1992 champions are not the favourites and neither do they have many stars in their line-up. To add to their troubles, a couple of their top players have been ruled out of the tournament. 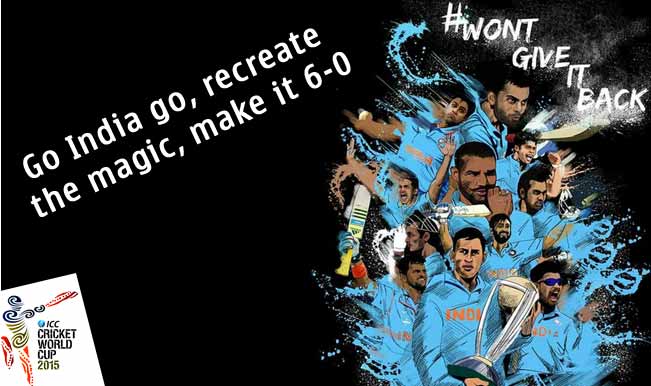 The Group B fixture once again raises the question of whether Pakistan will be able to break the jinx and defeat their neighbours in the sport’s showpiece event. 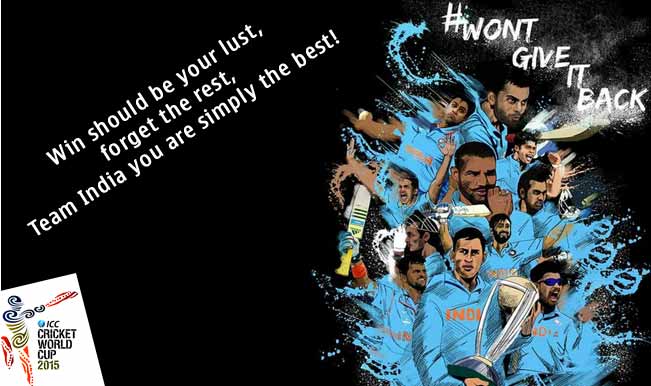 Message Reads: Win should be your lust, forget the rest, Team India you are simply the best!

For many the outcome of the World Cup doesn’t even matter as a victory in this match is as good as winning the title. 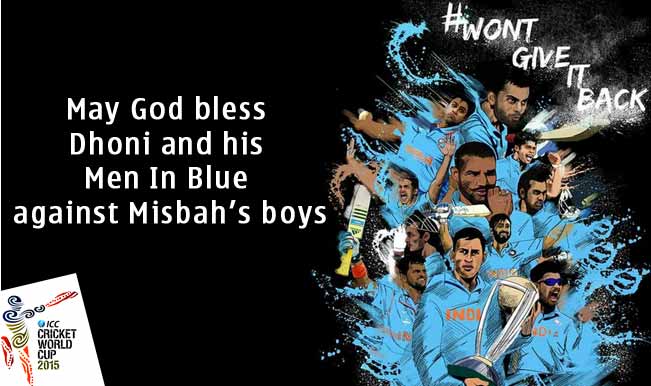 Message Reads: May God bless Dhoni and his Men In Blue against Misbah’s boys.

Meanwhile, Pakistan captain Misbah-ul-Haq Saturday urged his team to enjoy and “be positive” during their “high-pressure” World Cup opener against traditional rivals India at the Adelaide Oval here Sunday. 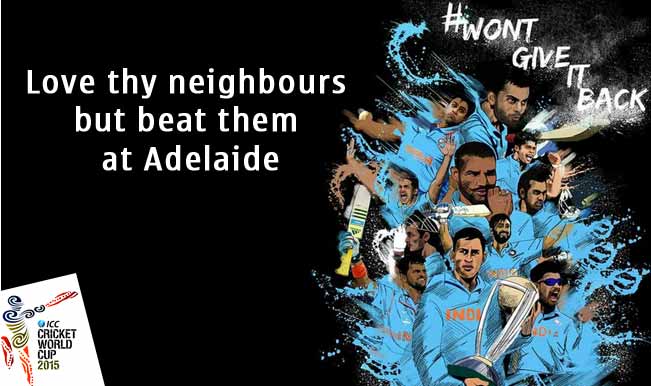 Message Read: Love thy neighbours but beat them at Adelaide. 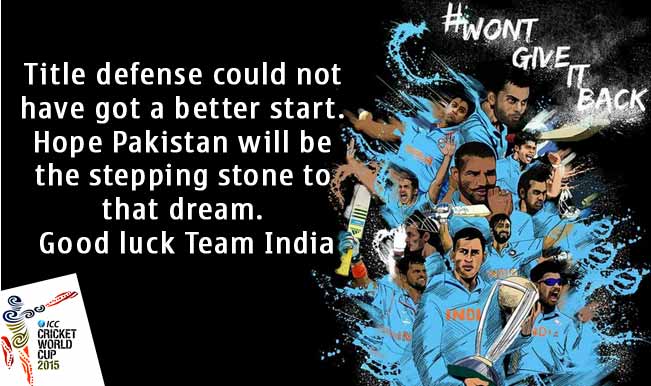 Message Reads: Title defense could not have got a better start. Hope Pakistan will be the stepping stone to that dream. Good luck Team India. 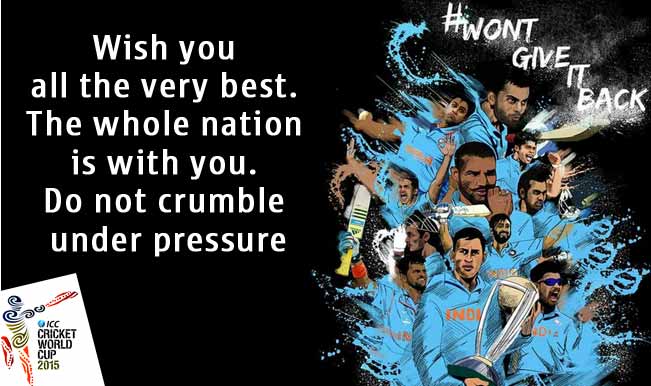 Message Reads: Wish you all the very best. The whole nation is with you. Do not crumble under pressure. 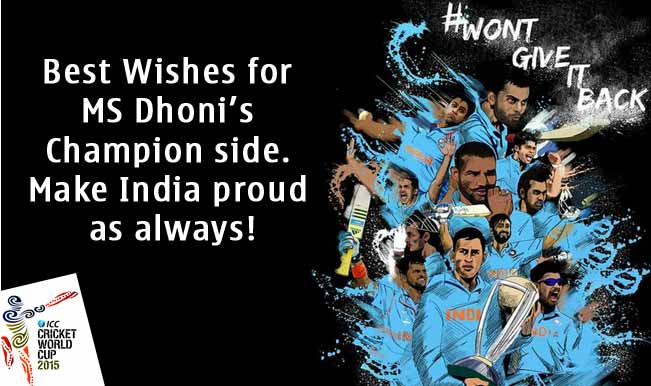 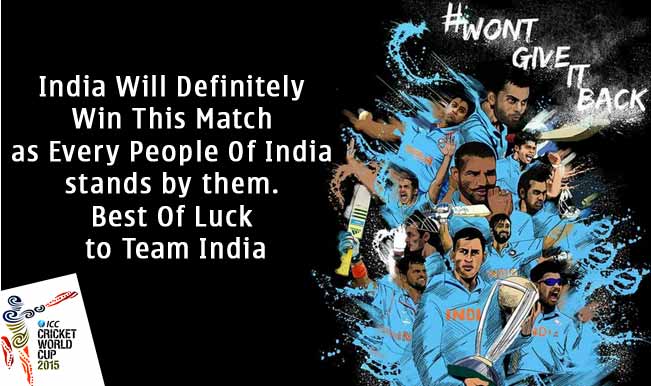 Message Reads: India Will Definitely Win This Match as Every People Of India stands by them. Best Of Luck To Team India.

India-Pakistan clashes always create a lot of buzz among cricket fanatics and it is no different this time, as the high-octane encounter is once again ready to enthrall fans during the World Cup 2015 at the Adelaide Oval Sunday, February 15. Both teams have had a poor run coming in to the World Cup and will definitely try to win and gain momentum before taking on the other big teams. Irrespective of the outcome, the India-Pakistan match promises to be a thriller as always and the rivalry will continue to be one of the most watched events of the World Cup!