Sri Lanka registered a comfortable nine-wicket win over England in the ICC Cricket World Cup 2015 Match 22 to move to Number two spot in Group A Points Table at the Westpac Stadium in Wellington on Sunday. 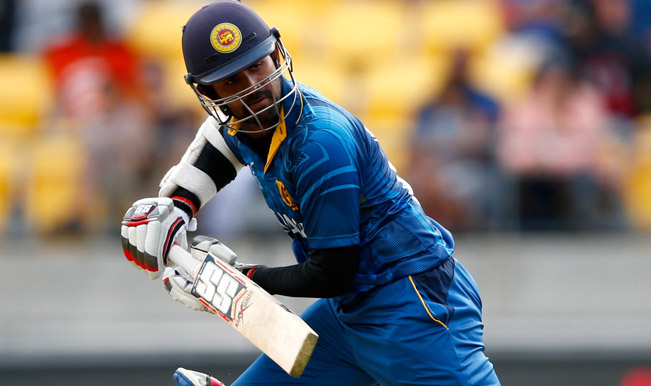 Sri Lanka registered a comfortable nine-wicket win over England in the ICC Cricket World Cup 2015 Match 22 to move to Number two spot in Group A Points Table at the Westpac Stadium in Wellington on Sunday. The Asian side put up a flawless display of batting led by centuries from two southpaws – Kumar Sangakkara and Lahiru Thirimanne Also Read - South Africa Recall Faf du Plessis For Home Series Against England

There have been many superb batting displays in this tournament. Brilliant bowling spells haven’t been few either. But on Sunday, there was a drab display of just heavy willows being put to good use. In all, three centuries were hit in the match. Bowlers had little assistance from the wicket. Not surprisingly, England skipper Eoin Morgan elected to bat after winning the toss. Also Read - Sunil Gavaskar, Kumar Sangakkara Predict Which Three Teams Will Join MI in IPL Playoffs

Chasing a competitive total of 309, Sri Lanka openers Lahiru Thirimanne and Tillakaratne Dilshan got off to a good start. The duo put on 100 runs for the first wicket. Moeen Ali got the breakthrough; but by then, Lahiru Thirimanne had reached his half-century and Tillakaratne Dilshan had set a good platform with his 55-ball 44. Kumar Sangakkara who joined Thirimanne following the fall of first wicket, stroked his way to a 70-ball century – joint fourth fastest for Sri Lanka. The first three in the line is Sanath Jayasuriya.

Sri Lanka’s bowling hasn’t inspired much confidence in this world cup. Barring a brief period of play where they managed to bag three wickets for 39 runs, they were outplayed by an out-of-form English batting line-up. After a solid 62-run stand for the opening wicket between Moeen Ali and Ian Bell, who missed out on a well-deserving half-century, they were set back with the fall of three quick wickets. Both the openers had departed alongwith Gary Ballance, who has been on a long run of poor form. At 101 for three in 20.2 overs, Sri Lanka were well and truly in command of the innings. ICC Cricket World Cup 2015 Schedule: Complete Fixtures & Time Table of all Cricket World Cup 2015 Matches.

Joe Root managed to resurrect the innings for the Poms with a 60-run stand for the fourth wicket. The skipper looked rusty and Root was still to get into his groove. But 85 balls and a wicket later, the innings was well placed. James Taylor, the new batsman at the crease to give Root company. This was the last time in the innings Sri Lanka were in command. From there on it for one of the unlikeliest batting display by the English. Root continued to hit over the top after reaching his 50 off 66 balls.

Lasith Malinga and Suranga Lakmal bore the brunt of his attack as he raced past to his century off as many balls – the next 50 coming off just 34 deliveries. In the process, he overtook David Gower to become the youngest century-maker for England in a world cup match. ICC Cricket World Cup 2015 Schedule in IST: Time Table, Fixture & Venue Details of all WC 2015 Matches.

James Taylor, meanwhile, put an exhibition of some unorthodox shots. Together the duo added 98 runs off just 11 overs – the highest fifth wicket stand by England in a World Cup. Jos Buttler and Chris Woakes carried the momentum on from thereon to take England past the 300-run mark.

There were unfortunate moments towards the end of the England innings. Rangana Herath was hit in the hand off a return shot in the penultimate over, forcing him off the field. In the last over, Suranga Lakmal bowled two beamers to Jos Buttler. Whether it was bowled intentionally or it slipped out his hands will remain unknown. But an unapologetic reaction by the bowler made for sorry viewing.